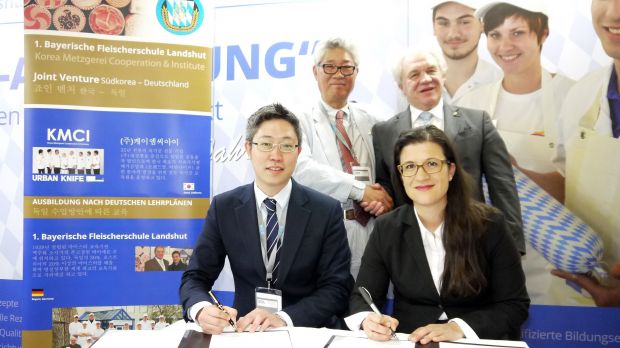 
At the world's largest trade fair for the meat industry, the IFFA in Frankfurt am Main, it signed a partnership agreement with Korea Metzgerei Corporation & Institute (KMCI) which runs butchers' shops to German standards and operates a private teaching facility for butchers in Seoul. In future, the Landshut college will be supporting this educational institution with its expertise. In return, students from South Korea will come to Lower Bavaria for further learning.


This joint venture has been initiated by Georg Zinkl, managing partner of 1.BFS, and KMCI proprietor Ho Sik Yu, who owns a Korean and a German restaurant in the South Korean capital in addition to a sausage factory. His two butcher's shops in major shopping malls (including a transparent sausage kitchen) under the company name "Urban Knife" are enjoying great success. Not only German cars and German beer but also German sausages are enjoying growing popularity. To avoid the need to import these and to be able to make German sausages themselves, the Koreans have enlisted the support of 1.BFS in Landshut for training. 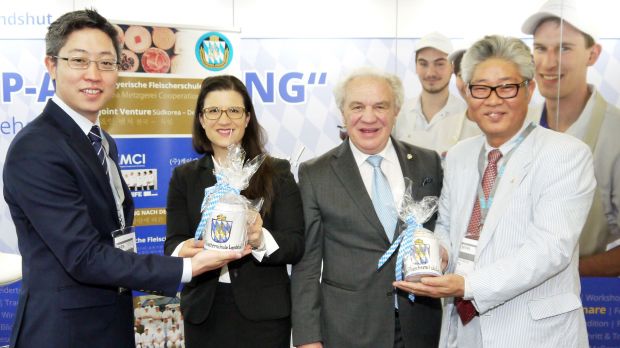 Horst Buchmann, buc
A butchery college tankard of beer to celebrate the new contract: Ho-Sik Yu (right) and son Byung-Kwan Yu (left) with Barbara and George Zinkl after signing the joint venture contract.
The dedicated butcher family Yu have organised numerous well-attended training seminars in their own butchery college, with up to 50 per cent of the costs being subsidised by the state. In the future it will be able do this based on the official curriculum of the Landshut college which was founded in 1928 - including everything from instructions for professional practice and theory of sausage-making through to marketing and corporate management. Upon completing their training, the students will receive a Korean master craftsman certificate. Those wishing also to obtain the coveted German Meister qualification must still come to Germany, learn the language and take the examination before the committee of a Chamber of Crafts.

Ho Sik Yu is optimistic of being able to offer two Meister classes for approximately 25 students per year. The 61-year-old regards the cooperation agreement with 1.BFS as an important boost not only for his company but for the entire South Korean meat industry. After all, German quality is world-famous - in the manufacture of meat products, for instance, as well as in the dual system of vocational training with the master craftsman qualification as the crowning achievement.

KMCI junior manager Byung-Kwan Yu, who is currently in Landshut preparing for his master craftsman exam at the end of June, is a pioneer in this respect. Afterwards the 36-year old is looking to take over as manager of his father's butchery school in Seoul.

At the contract signing, which was filmed by a camera team of the South Korean news channel YTN World, Barbara Zinkl, Managing Director of Fleischerschule Landshut, was proud that her college, which has been in existence since 1928, enjoys such a strong reputation worldwide. After all, it regularly attracts master craftsman students not only from neighbouring countries such as Austria and Italy, but also from Sweden, Russia or China. It has engaged in technical know-how transfer for over ten years with a partner school in Kamamoto/Japan.

Georg Zinkl announced that the college is considering launching a promotional quality seal for meats which are based on "original recipes of the 1st Bavarian Butchery College Landshut" for the benefit of its new South Korean partner.