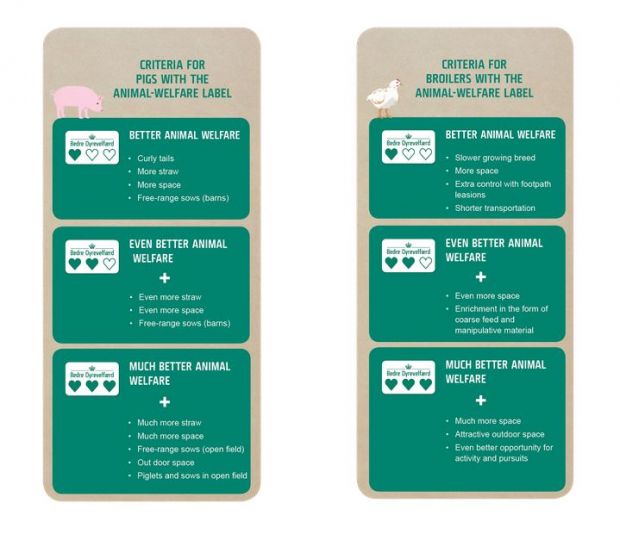 The intention of the government animal welfare label – named "Better Animal Welfare" - is to improve the animal welfare of as many pigs and broilers as possible through consumer purchasing.

DENMARK, Kopenhagen. The Danish animal welfare label is not in such high demand. According to a media report, Danish Crown, the leading slaughter company, has terminated contracts with a number of suppliers of slaughter pigs that produce according to the rules of the three-tier seal due to a lack of demand.


It would be a considerable damper on the label introduced for pigs in 2017. Retailers, the media and consumers had received the label very positively right from the start. In food retailing, certified meat products had already accounted for a quarter of the product range within six months.

Label
The label is developed by the Danish Veterinary and Food Administration in collaboration with relevant stakeholders throughout the entire commercial food train: The Organisation for cooperation of animal welfare groups (DOSO), the Danish Veterinary Association, the Danish Agriculture & Food Council, DI food, DanHatch Danish Crown, Danpo, Tulip, Danske Slagtermestre (the Danish butchers association) and retail businesses Salling Group (Bilka, Føtex og Netto), De Samvirkende Købmænd (including MENY, Rema1000, KIWI and Spar) and Lidl and Aldi).
According to the report, however, sales in several categories have fallen again in the meantime, which is why DC was forced to terminate part of its contracts due to a lack of sales opportunities.

The Danish Agricultural Association (L&F) was disappointed by this development and held consumers responsible. Although customers have asked for continual improvements in animal husbandry conditions in surveys, they do not seem to be prepared to support this to the extent necessary with their purchasing behaviour.