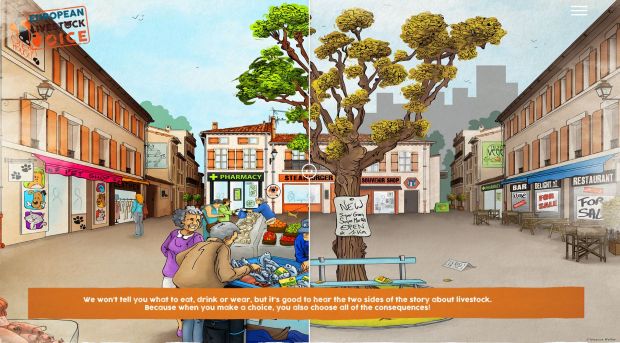 BELGIUM, Brussels. The livestock sector is today at the epicentre of public debates in Europe and beyond. These debates have become dominated by interest groups who only want to spread myths and radical views about livestock farming. Ever increasing on social media and in the press, these myths and opinions end up portraying a picture that is in stark contrast with the reality experienced and lived every day by thousands of European farmers and professionals working with them on the ground.


In this context, and for the first time at EU level, the EU livestock value chain (The European Livestock and Meat Trades Union (UECBV)) have decided to come together to take joint action to elevate the other side of the story, necessary to restore balance and factual information on both the impact and the contribution of the European livestock sector. With this objective in mind, European Livestock Voice has developed its own information hub, an online portal reviewing the accuracy of the most frequently made statements about livestock production, consumption and its benefits:

These debates have strong impacts on the views of European consumers on the role of animal products in their choice of lifestyle and they push the livestock sector into an extremely defensive corner of the society. It all negatively affects the EU livestock farming model and policy framework, increasing the challenges faced by our farming communities to ensure their economic viability, generational renewal and their capacity to adapt to societal and environmental demands.

The organization is convinced that the EU livestock farming model, based on diversified, local and family farm structures, is the backbone of the EU’s rural areas. It supports a great number of jobs and industries, it contributes to the circular approach within the EU bioeconomy, while also ensuring a steady and affordable supply for sufficient, safe and nutritious food, as well as many other products and by-products, needed for a healthy lifestyle or Europe’s Cultural and Creative Industries.

Removing livestock farming from Europe, a “Livestock Exit”, would have severe consequences. Europe without livestock would lose essential pasture lands, face increased forest fires, lack greatly in organic fertilizers, green energy and many other essential raw materials while contributing to an increased rural exodus. At the same time, it would mean the need to rely on imports of animal products, with less control over the production standards and pulling on the demand for fossil fuel-based materials.

European Livestock Voice is a multi-stakeholder group of like-minded partners in the livestock food chain, that have decided to unite for the first time to balance the debate around a sector playing such an essential role in Europe’s rich heritage and future. The associations involved, which represent sectors ranging from animal health to feed, to breeding and animal farming and farmers, aim to inform the public about the societal value of livestock production and its contribution to global challenges, offering an alternative narrative to current debates.