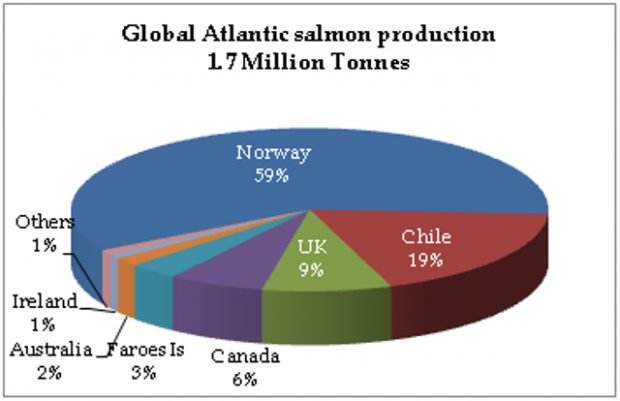 Ireland is Europe’s leading producer of organic salmon with over 80% of total annual production in Ireland being organic and certified to the European Organic standard. Irish organic salmon was also the first seafood product to achieve the official French Agriculture Biologique (AB Bio) status in France in 2001.

The total volume of overall farmed Atlantic salmon in the world was around 1.7 mill. t in 2012 according to recent estimations from the FAO. Ireland produced around 15,000 t or less than 1% of global production. This is because salmon farming in Ireland is based on a low-intensity model in respect of the European organic certification standard, which requires exceptionally low stocking densities.

As well as the stocking density of fish, the organic salmon standard specifies, amongst other criteria, that only sustainable organic feed can be used and natural products and processes are preferred over synthetic ones. Environmental monitoring, reduced waste outputs and elimination of non-recyclable materials are all part of the standard.

Ireland is void of heavy industry on its coastline and in consequence Irish seafood contains very little environmental contaminants. In 2012, in excess of 759 tests for 1,596 substances were carried out on 169 samples of farmed finfish for a range of residues by Ireland's Marine Institute under the national residue-monitoring plan. As in previous years, no non-compliant results were reported.
Source: Bord Bia