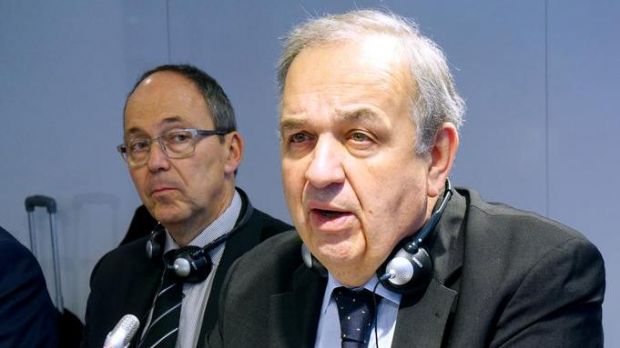 Getting the best deal for craft butchers in negotiations at the EU: IBC President Jean-Marie Oswald, in the background IBF General Secretary Martin Fuchs.

Craft butchers have a powerful and efficient organisation representing their interests at the EU level in the International Butchers' Confederation (IBC). The member associations are now looking to collaborate even more closely. This was decided at the annual general meeting in Brussels.

Accordingly, it will no longer be just the heads of the member associations who meet regularly. Experts on different topics will now confer occasionally across national borders, both via low-cost Skype links but also (where financially possible) in face-to-face meetings.

Kirsten Diessner reviewed the achievements of the last year during the session: "Our intensive lobbying proved highly successful in the revision of the official controls," explained the head of the IBC General Secretariat in Brussels. We have created the basis for fairer charges and warded off mandatory fees. In addition, it now seems likely that it will be possible for trained personnel to carry out livestock inspections on the farm up to three days prior to slaughter and for the meat inspection to be conducted in one go at the end of the slaughter day.

The representatives of Europe's butchers were also critical of the fact that food companies will be able to decide themselves whether meat with boar taint is allowed into the food chain or not in the future.

The EU Commission sees no need for action with regard to the labelling of vegan and vegetarian sausage and meat substitute products. The Food Information Regulation provides sufficient protection to consumers against misleading information, it was felt. However, members of the European Parliament have recognised the importance of the topic and have come out firmly in favour of the butchers. It now seems possible that the topic will be included in the CAP discussions from 2020 and that the members could insist that EU marketing standards also be formulated for meat and meat products. Such standards already exist for milk and milk products, which is why names such as vegetable-based cheese or tofu butter are prohibited.

Together with the representatives of the industrial meat product manufacturers (Clitravi), the IBC now intends to draw up a list of potential products for new EU standards. Given the wide variety of sausage and ham products in Europe, limiting this to individual products would not appear to be an easy task.
Source: afz 49/2017