Insects: Food of the future?

Insects: Food of the future? 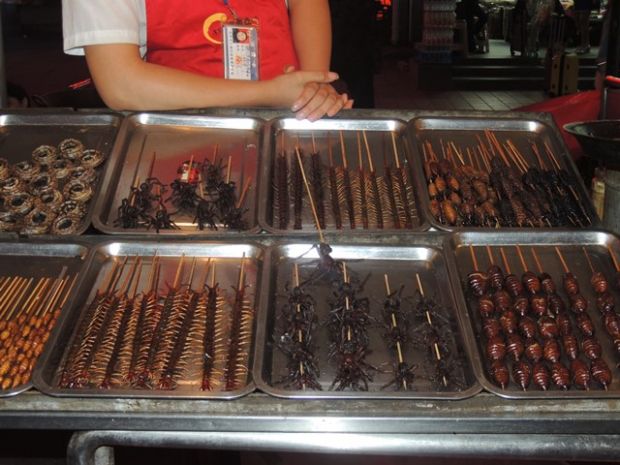 As the human population grows, it is critical that the drain on the planet’s resources be lessened by decreasing consumption of animal protein. According to two panel discussions on June 23 and 24 at the 2014 Institute of Food Technologists (IFT) Annual Meeting & Food Expo in New Orleans, insects are a promising, economically viable alternative source of high quality protein that leave a substantially smaller environmental footprint.

The world adds about 70 mill. people each year to the population. If worldwide growth continues at the current rate, the population is expected to reach more than 9 bn. by 2050, adding twice the current population of China. Approximately 70% of agricultural land, and 30% of the total land on earth, is currently used to raise livestock, the world’s main source of protein.

According to Florence Dunkel, Ph.D., Associate Professor of Entomology at Montana State University and editor of Food Insects Newsletter, “Eighty-five insect species in the U.S. are documented as potential food sources; worldwide, there are 1,900 species.” She cites locusts, grasshoppers, crickets, silk moth pupae, and beetle and moth larvae among the top insects consumed as food, worldwide.

While insects are considered tasty and nutritious in other countries, including Thailand, Mexico and Uganda, Americans are less enthusiastic about eating bugs. “We have to overcome the ‘ick’ factor,” said Laurie Keeler, Senior Manager-Food product Development, the Food Processing Center, University of Nebraska.

Most insects are a rich source of high-quality, highly digestible protein. “Some insects are as much as 80 percent protein by weight and provide more essential amino acids than most animal proteins,” said Dr. Dossey. “They are also rich in nutrients like omega-3 fatty acids.” On a dry weight basis, crickets contain as much omega-3 fatty acids as salmon.

While in some countries, insects are harvested in the wild, such practices are typically inefficient and involve risks from environmental toxins and pathogens. Insects, such as crickets and mealworms, can be efficiently farmed in an industrial setting free from contaminants.

There are a number of challenges for quality mass production of insects that still must be overcome, but the expert panels agreed that insects as a source of food is the way of the future.
Source: Institute of Food Technologists (IFT)