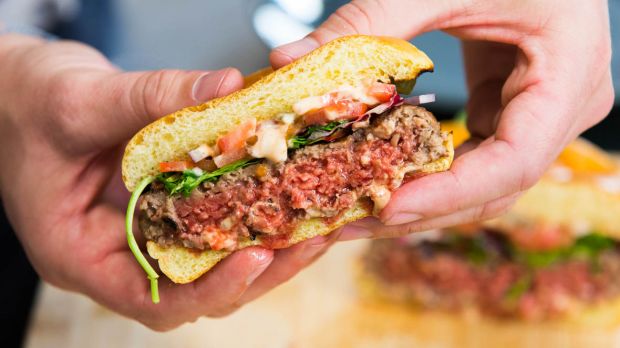 Impossible Foods is speeding up the development of new meat alternatives.

USA, Redwood City, Calif. Impossible Foods CEO Pat Brown said on CNBC’s “Squawk on the Street” that the company is speeding up its development of new meat alternatives.


The company announced two new products, Impossible Pork and Impossible Sausage, its first since releasing the vegetarian Impossible Burger three and a half years ago. Select Burger King restaurants will sell the meatless sausage in the Croissan’wich later in January, but Impossible has not given a timeline for the release of its meat-free ground pork.

Part of speeding up Impossible’s innovation cycle includes nearly doubling the size of the company’s research and development team in the next 12 months, Brown said. And the focus of those scientists won’t just be on mimicking red meat such as pork and beef.

Shares of Impossible’s rival Beyond Meat, which sells its own meatless sausage product, were up nearly 7% in morning trading Tuesday. Since going public in May, Beyond has seen its shares soar more than 200%. Impossible has not shared any plans to go public. Still, Brown said Tuesday, “I think it’s reasonably likely at some point that we’ll go public.”

Following Reuters Impossible Foods is no longer trying to win a coveted deal to supply McDonald’s Corp with plant-based burgers, because it cannot produce enough of its imitation meat to partner with the world’s No. 1 fast-food chain.

It is the latest twist in the battle of imitation-meat makers hoping to convince more restaurants to offer their patties. But it was unclear how far talks had progressed with McDonald’s, which declined to comment on the discussions. Shares of Impossible rival Beyond Meat closed 12.5% higher after Reuters reported that Impossible was no longer in talks with McDonald’s.