Delegation travels to Moscow for discussions 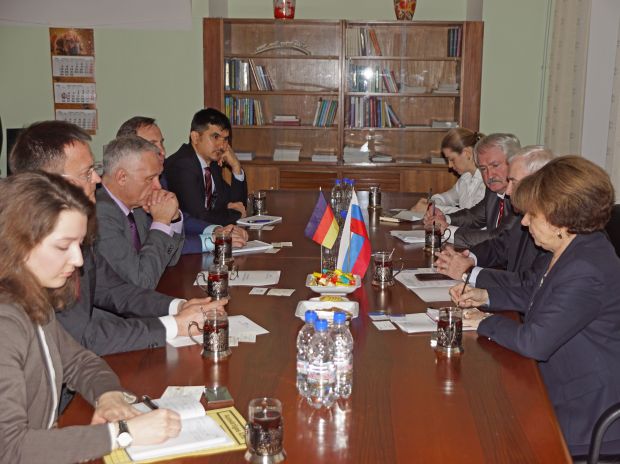 The Iamo delegation in discussion with the Russian Academy of Sciences as well as the German Embassy in Moscow.


There the Iamo researchers held bilateral discussions with respected research institutes and organizations regarding the opportunities for research and further development of the agricultural sector in Europe and Asia.

Alongside the presentation of ongoing research projects of the institute, the participants in the co-operation negotiations discussed what specific measures can be taken to improve interaction between representatives from the fields of science, politics and practice.

In the scope of the visit, which lasted several days, Iamo researchers Professor Thomas Glauben, Dr. Ihtiyor Bobojonov, Dr. Ivan Duric and Dr. Oleksandr Perekhozhuk met for in-depth discussions with representatives of renowned research institutes and organisations in Moscow, including the heads of the German Houses of Research and Innovation Moscow (DWIH), the director of the Moscow office of the Food and Agriculture Organization of the United Nations (FAO), the president of the National Union of Food Exporters, the staff members of the German Embassy in Moscow, the heads of the Russian Academy of Sciences and other acclaimed research institutes, such as the Center of Economic and Financial Research (CEFIR), the New School of Economics (NES) and the Higher School of Economics (HSE).

In a very open atmosphere the various partners discussed issues within the context of globalisation, digitalisation and geopolitical challenges concerning the possibilities for establishing more long-term oriented, sustainable co-operation formats for researching developments in the food sectors of Europe and Asia.

In addition, the Iamo researchers reported on the current research projects at the institute, such as the BMEL-funded Starlap project for the globalization of food chains in the Russian Federation, the BMBF-funded KlimAlez project for the establishment of agricultural insurance markets to cover climate risks in Central Asia and the BMBF-funded UaFoodTrade project regarding the integration of Ukrainian agricultural markets.

Within the highly constructive discussions the first considerations concerning the establishment of a sustainable joint platform for regular interaction and the staging of events as well as the joint addressing of research issues and projects were raised. In addition, intensive exchange of researchers and increased dialogue with representatives from the fields of policy and practice are also planned. “The discussions once again highlighted the considerable interest and high degree of openness of our partners in the Russian Federation for sustainable co-operation,” said Thomas Glauben.