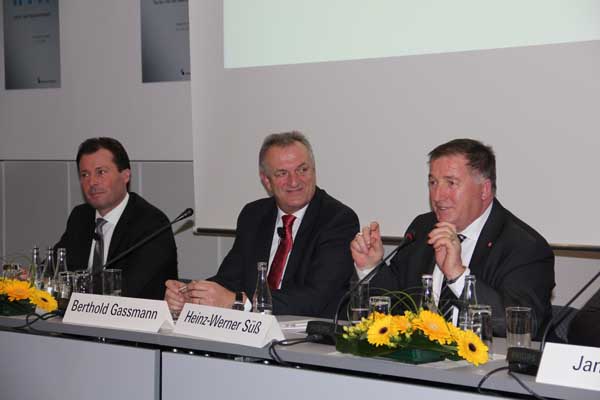 "For many years now the IFFA has been the leading world trade fair for the meat industry and this year it's about to get even bigger with a new hall layout and supporting programme."

This is how IFFA advisory board chairman Berthold Gassmann described the new face of the IFFA 2013. 950 exhibitors from 47 countries will be presenting their new products to an expected 58,000 trade visitors in an exhibition area which has been expanded by six percent to 110,000 square metres. Messe Frankfurt CEO Wolfgang Marzin is delighted that Hall 11 has been successfully integrated. This makes it possible to respond to the desire expressed by many exhibitors for increased stand space. Marzin sees the large numbers of international exhibitors and visitors as proof of the global importance of the IFFA. Three years ago 55 percent of the exhibiting companies and 59 percent of visitors came from abroad. There were 24,180 visitors from Germany.

The IFFA with colleagues

A walk round the exhibition is a must for butchers wanting to keep up-to-date with all the latest developments, explained Heinz-Werner Suess. "And it's best done with colleagues," said the President of the German Meat Processing Association, promoting the guild trips initiated by Messe Frankfurt. The "Butchery Market Place" will once again be inviting visitors to compare notes with their colleagues. This will be in Hall 4.1 between the competition area and the DFV, Zentrag and "afz" exhibition stands. This is where the special butchery sector shows such as "Butchery Trends" and competitions are held. The "International quality competition for products in cans and jars" will be held for the first time. The "International Display Cooking Competition" is being staged again in conjunction with the Young Butchers Association. The IFFA Family Day including activities for children will be held on the last day of the event. A particular highlight will be the international Young Butcher competition. The best upcoming young butchers will be competing against each other in a range of disciplines.

The Meat Vision Congress is to be launched in 2013 with a gala night and awards presentation. The meat industry will be getting together on the day before the fair opens its doors for this. The event is being organised by Deutscher Fachverlag and its meat-related publications "afz" and "FleischWirtschaft".