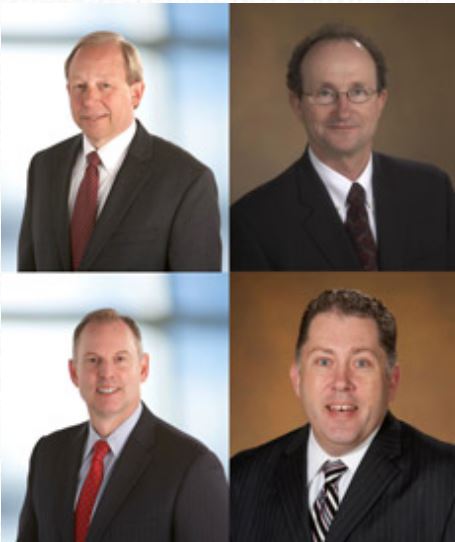 Lyons joined Hormel Foods in 1978 as an industrial engineering trainee at the company’s former Fort Dodge (Iowa) Plant. In 1981, he became a compensation analyst at the Corporate Office (Austin, Minn.), and later became the industrial relations supervisor. In 1988, he transferred to the Beloit (Wis.) Plant in the role of manager of personnel and purchasing. Lyons became the corporate manager of safety and security at the Corporate Office in 1993, followed by other human resources roles including manager of employee relations and director of personnel, until being named director of human resources in 2006. He assumed his current role in 2014.

In 1981, Farnsworth began his career with Hormel Foods at the Fremont (Neb.) Plant. He held a variety of quality and process control positions at the Fremont Plant, Corporate Office, Austin (Minn.) Plant, Beloit Plant and at Jennie-O Turkey Store. He gained plant manager experience in 1995 at Jennie-O Turkey Store Willmar (Minn.) and Montevideo (Minn.) facilities, and moved back to the Corporate Office in 1996 as director of quality management. Farnsworth advanced to vice president of quality management in 2005 and assumed his current role in 2014.

Coffey began his career with Hormel Foods in 1985 as a relief foreman at the company’s former Ottumwa (Iowa) facility. He held various relief foreman and foreman positions at the Austin Plant, the former Dallas (Texas) facility and the Atlanta Plant (Tucker, Ga.), before becoming the supervisor of sausage and cured and smoked meats at the Atlanta Plant in 1989. Two years later, he moved to the Corporate Office as the product manufacturing manager for cured and smoked meats, followed by the product manufacturing manager for fresh sausage and linear programs in 1993. From 1995 to 2011, Coffey worked as plant manager for the former Houston (Texas) facility, Dold Foods (Wichita, Kan.), Osceola (Iowa) Food, Fremont (Neb.) Plant and then the Austin Plant. He assumed his current role in 2011.

Morey began his career as a meat products sales representative in Dallas (Texas) in 1993 and the same year became a territory manager in Minneapolis (Minn.). In 1994, he became a meat products product manager at the company’s former Dubuque (Iowa) Foods facility and in 1995, became a regional foodservice sales manager for Dubuque Foods in Boston (Ma.). In 1998, he returned to the Corporate Office as the product manager of fresh pork. Two years later, he became the director of marketing, Precept Foods, and in 2006 became a group product manager in meat products. In 2008, he advanced to director of fresh meats marketing and general manager of Precept Foods. Morey moved to president of Dan’s Prize in 2009 then president of Farmer John in 2015.
Source: Hormel Foods
tags:
Austin Plant Mark Coffey Mark Morey Iowa Fremont Texas USA