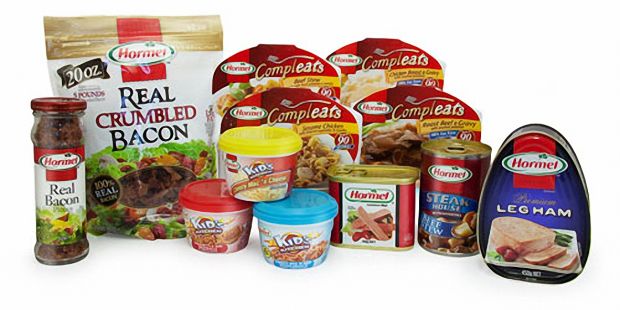 Net sales for the period eased 1% to $2,280,227,000 compared to $2,292,672,000 reported a year ago. Excluding the impact from the Justin’s LLC acquisition, and the divestitures of the Diamond Crystal Brands and the Farmer John businesses, non-GAAP adjusted sales advanced 3%.

On a segment basis, Jennie-O Turkey Store profit sharply declined 25% to $68,180,000 from $91,303,000 reported in the year-ago quarter. Hormel attributed the result to reduced supplies of turkey due to an outbreak of highly pathogenic avian influenza, higher commodity prices and pricing pressure from competing proteins sold through foodservice, deli and retail stores. Sales in the segment climbed 13%, while volume increased 22%. Hormel said the increase in sales for the quarter was linked to the HPAI impacted results from 2016.

Sales in the Grocery Products business increased 7% to $417,745,000 in the first quarter, up from $392,218,000 reported a year ago, reflecting the company’s acquisition of Justin’s specialty nut butters along with strong sales of Wholly Guacamole dips, Skippy peanut butter products and Herdez brand salsa, the company said. Segment profit climbed 1%. Results were partially offset by higher advertising expenses in support of key brands such as Wholly Guacamole and Herdez, the company said, in addition to integration costs related to the Justin’s acquisition.

Pork exports saw double-digit increases in net sales growth in the first quarter, but the gains were unable to offset declines for branded exports, according to the company. Net sales in the International segment were down 2.1% to $125,825,000 compared with $128,488,000 reported in the year-ago quarter. Hormel said delays in shipments to key markets shifted volume into the second quarter of 2017.