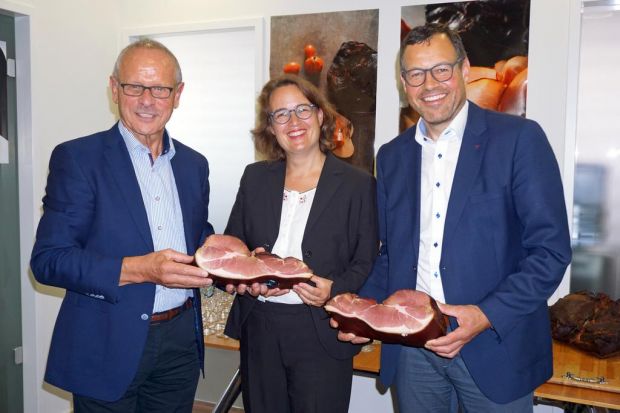 
After founding the association, the member companies agreed, after much wrangling, on a uniform set of specifications and a clearly defined geographical area. "We were keen competitors, but it was a necessary step," recalls Hans Schnekenburger, founding member and still serving on the board of directors of the protection association, at the press conference in Frankfurt am Main. Since then, the association has consistently protected the brand and provided the required quality assurance.

Dry-cured ham from southwestern Germany is now also protected by the EU, and its sales have increased gratifyingly in the past 30 years. "Today, all consumers are familiar with Black Forest ham," claims Schnekenburger. The board of directors, which also includes Marie-Luise Adler and Andreas Göring, was also more than satisfied with business last year, when almost two per cent growth was posted. The association's members, which include 13 companies and three guilds, sold a total of 9.4 million Black Forest hams in 2018. 70 per cent of this was in the form of pre-packed sliced products. By far the largest proportion (85 per cent) was sold to customers via supermarkets, a further ten per cent via specialist retailers and five per cent via the catering trade. Over a quarter of the production is exported. The most important markets are France, the United Kingdom, Benelux and eastern Europe.

However, the association is concerned about the rally in the price of pork seen in recent months. The increase of 50 cent per kilo in the wholesale price of pork equates with a EUR 1.15 to 1.20 mark-up on the finished product, as production board member Göring explained, describing the tense situation. And retailers have difficulty passing on these higher costs to consumers. The meat processors no longer simply feel sandwiched between the highly concentrated slaughter sector and the equally concentrated retail industry. For them, it feels more like being trapped in a vice, emphasised Göring.

The producers are proud of their healthy growth, especially against the background of the overall decline in meat consumption. However, the discussion surrounding higher VAT rates on meat (or even a dedicated meat tax) being held across all political camps is evidence of the general political will to reduce consumption. It represents a further source of worry for the producers.

Raising the profile of this protected speciality is therefore at the heart of the association's strategy for the future. The "Taste Tradition" campaign is now being launched with this in mind. "We think it important to attract young people in particular to our product by highlighting its epicurean and sensuous aspects," explained Marie-Luise Adler, Marketing Director. This target group, after all, is one that attaches considerable importance to traditional and high-quality food. The campaign features striking imagery and is set to run from September on YouTube, Instagram and Facebook as well as on the website.