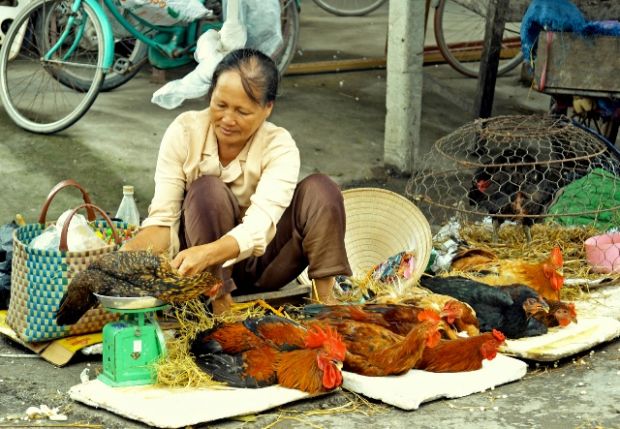 fleischwirtschaft.com — KENYA, Nairobi
Facebook
Twitter
Related News
A new study reveals conditions linked to the emergence and spread of bird flu and maps the areas of Asia at greatest risk of the spread of the new virus strain.

A dangerous strain of avian influenza, H7N9, that’s causing severe illness and deaths in China may be inhabiting a small fraction of its potential range and appears at risk of spreading to other suitable areas of India, Bangladesh, Vietnam, Indonesia and the Philippines, according to a new study published today in the journal Nature Communications.

Researchers from the Université Libre de Bruxelles (ULB), the International Livestock Research Institute (ILRI), Oxford University, and the Chinese Center of Disease Control and Prevention analyzed new data showing the distribution and density of live poultry markets in China and of poultry production overall in the country. They found that the emergence and spread of the disease up until now is mainly linked to areas that have a high concentration of markets catering to a consumer preference for live birds and does not appear related to China’s growing number of intensive commercial poultry operations.

They have pinpointed areas elsewhere in Asia with similar conditions (places with a high density of live bird markets) that could allow H7N9—which has infected 429 people thus far and killed at least 100—to significantly expand its range.

Places at risk include urban areas in China where the disease has not yet occurred, along with large swaths of the Bengal regions of Bangladesh and India, the Mekong and Red River deltas in Vietnam, and isolated parts of Indonesia and the Philippines.
The researchers found that the key factors facilitating the emergence and spread of H7N9 are dense clusters of live poultry markets, which aggregate birds from large geographical areas, located near or just outside densely populated urban areas. The existence of ‘wetland-related’ agriculture near the markets, such as farms that raise ducks in flooded rice fields, appeared to be a contributing factor linked to the initial emergence of the virus.

But overall, the scientists did not find a link between the emergence of H7N9 and ‘intensive’ poultry operations proliferating in China that raise a larger number of birds. In fact, the study notes that H7N9 has thus far been absent from live poultry markets in Northeastern China, a region that is home to many of the country’s commercial-scale poultry operations.

The study notes that there is evidence that certain factors within live poultry markets, such as the amount of time the birds are there, the rigor of sanitation measures, and ‘rest days’, that can influence the spread of the disease, suggesting potential options for reducing risks of further transmission of H7N9. But researchers also point out that in China, despite ‘remarkably strict control efforts’, the virus has continued to slowly expand to new areas—evidence that ‘H7N9 is difficult to contain along poultry market chains and may spread beyond the distribution indicated by the human cases’
You can buy the rights to this article here.
Source: ILRI