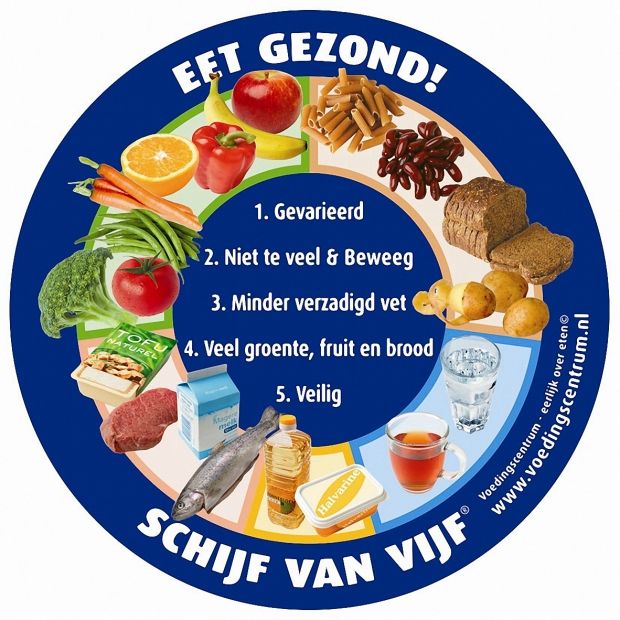 The "Schijf van Vijf" or "Wheel of Five" is well known in the Netherlands.

THE NETHERLANDS, Den Haag. The Dutch have slashed recommended meat consumption by almost half, citing both health and environmental reasons in what has been hailed as "a breakthrough" by sustainable food experts.


The revised recommendations advise up to 500 g of meat per week, which can include up to 300 g of red meat. This is because red meat is higher in saturated fats but also because beef, pork and veal have the highest environmental impact, it says. Given that Dutch men currently eat around 930 g of meat per week, the new advice calls for their intake to be almost halved. Women consume about 615 g of meat per week.

Consumers should be replacing meat with more sustainable protein sources: fish, pulses, nuts, eggs and vegetarian products, said the Centre which is 100% government-funded to provide consumers with science-based and independent information about healthy, safe and sustainable food choices.

The guidelines urge consumers to only choose sustainably sourced fish and to favour whole and raw foods over processed products with the recommended daily amount of vegetables rising by 50 g to 250 g.

Health concerns are also taken into consideration for the eating guide that was compiled using dietary guidelines as well as input from the National Institute for Public Health and Environment, external scientists in the fields of nutrition and sustainability, as well as consumer feedback.

Sausages, burgers, marinated meats and kromeskies – a Dutch specialty consisting of a minced meat croquette that is rolled in bacon and fried – do not appear in the “Wheel of Five” infographic at all due to the link between eating processed meat and a higher risk of stroke, type 2 diabetes and colon cancer. Nor do processed meat spreads such as pâté, which consumers are advised to replace with nut butters, hummus or dairy spreads such as soft goat cheese.

But plant-based alternatives have not escaped the scrutiny of the Centre’s nutritionists who warn against processed meat substitutes, such as veggie burgers or sausages, that may be high in salt. They advise people to search out tofu or tempeh products that contain less than 1.1 g of salt per 100 g.

The guide is also intent on clearing up consumer confusion over “not too much and not too often” by providing clear cut guidelines. Small snacks such as a few slices of salami, a small biscuit, piece of chocolate or a tomato ketchup condiment should be eaten a maximum of three to five times a day. Bigger unhealthy snacks such as a croissant, a slice of pizza, a frankfurter sausage, a glass of soda or a bowl of sweetened cereal should be eaten a maximum of three times a week.

Back in 2009 Sweden became the first country in the world to build a national set of dietary guidelines that took on board sustainability as well as health. Research in 2015 showed that 92% of Dutch consumers were familiar with the “Wheel of Five” image.