Over 2,000 representatives debated at the GFFA 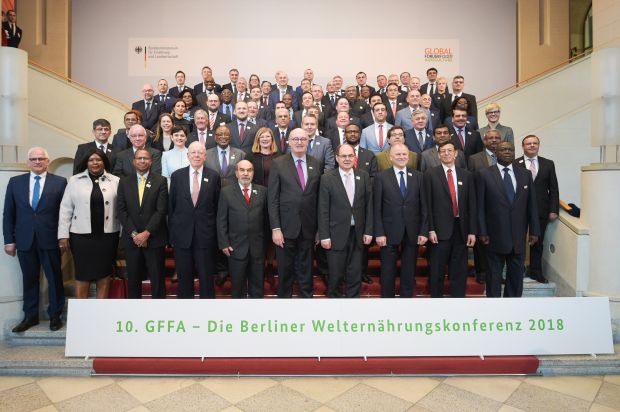 GERMANY, Berlin. How can we make livestock farming more productive to feed the world’s rising population, while protecting our climate and dwindling resources, i.e. soil and water? And how can we fulfil the consumer desire for high animal welfare standards?


These were the issues debated by over 2,000 representatives of politics, science and society at ten panel discussions, two high-level panels and a business panel at the 10th Global Forum for Food and Agriculture (GFFA) in Berlin.

The outstanding political event over the three days was the 10th Berlin Agriculture Ministers' Conference, the largest of its kind in the world. Agriculture ministers from 69 countries, representatives of the EU Commission and numerous international organisations had accepted the invitation of Federal Minister of Agriculture Schmidt to come to Berlin. Following previous rounds of discussion their task was to lay down parameters for sustainable and efficient livestock farming.

In their final communiqué the government representatives called upon their counterparts and all international organisations to take action, specifically to

• take steps to improve the livelihoods of livestock farmers, by facilitating a more important role in the supply chain and working conditions in compliance with the standards of the International Labour Organization (ILO);

• protect our climate, environment and resources, by promoting resource-efficient agricultural systems and supporting a knowledge exchange with the aim of reducing livestock farming emissions.

• improve animal health and welfare, including by facilitating better access to veterinary advice and services. The ministers unanimously called for measures to prevent the spread of antibiotic-resistant organisms and the unnecessary fattening of livestock.

With this communiqué the agriculture ministers pledged to actively support the Agenda 2030 with its focus on sustainable development, which the international community agreed upon in 2015. At the close of the conference the German Federal Minister Christian Schmidt handed the communiqué to Monique Eloit, director general of the World Organisation for Animal Health (OIE), and José Graziano da Silva, director general of the Food and Agriculture Organization of the United Nations (FAO).