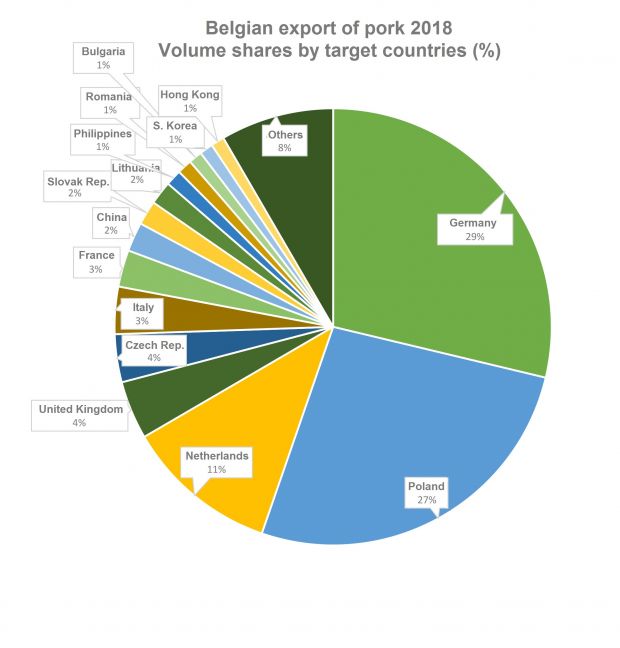 In 2018, global producer prices for pork were significantly lower than in the previous year, due on the one hand to the global overhang and on the other to the increased incidence of ASF.


The self-sufficiency rate for pork in the Kingdom is 222%. This means that the majority of pigmeat production is exported. In 2018, global Belgian pork exports amounted to 816,609 t, a moderate increase of 2.7% over the previous year.

In 2018, global producer prices for pork were significantly lower than in the previous year, due on the one hand to the global overhang and on the other to the increased incidence of ASF. All in all, the Belgian export business recorded a drop in sales of 10% to € 1.22 bn.

On the other hand, exports of pork to Poland have gained considerable momentum: exports to that country were increased by 22.3% to a record volume of 216,848 t. Poland now accounts for 26.6% of Belgian exports. The Netherlands, Belgium's third most important customer, ordered around 92,386 t of pork in 2018. Compared to the same period last year, this is an increase of just under 1%.

Business with third countries is estimated at 69,949 t, a landslide-like minus of 21.2%. The reason for this is ASF, which was detected for the first time in September 2018 in feral pigs that died in the southern Belgian province of Luxembourg. The maps for third-country markets have therefore been completely reshuffled. Belgium's most important trading partners are now China with 17,605 t, the Philippines with 9,632 t, South Korea with 8,113 t and Hong Kong with 8,091 t.