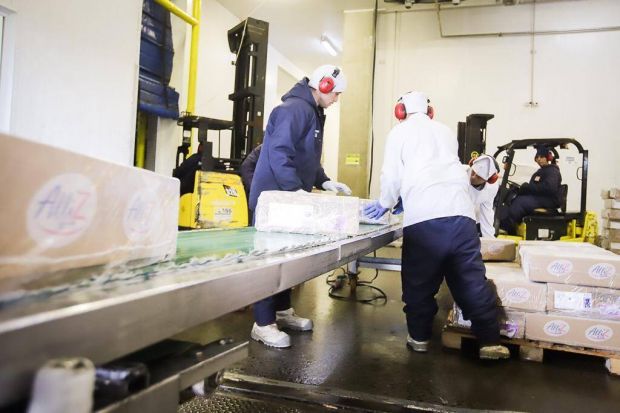 Staffs of a food company of Brazil pack chicken meat sent to China at the Port of Santos in Brazil.


CEO Neivor Canton said in an interview with Reuters that Aurora, a privately held company competing with Brazil-based heavyweights JBS SA and BRF SA, wants to expand its poultry capacity by 20% in two years and will invest 500 million reais ($93 million) in 2021 to achieve that goal. Aurora processes about 6,000 t of animal protein daily and exports about a third of that, the executive said.

The strategy underscores Aurora's resilience amid rising feed costs, disruption of meat plants in Brazil by the COVID-19 pandemic and occasional export bans imposed by China after outbreaks. The company, which is headquartered in southern Brazil, uses 160,000 t of corn to feed hogs and chickens each month. Right now, it is facing a grain price rally that rendered domestic corn prices "absurd" and shows no sign of abating, Canton said.

Despite the cost increase in recent months, the company posted record operating sales in 2020 on the back of strong exports. It hopes to further strengthen trade ties with China, as the Asian customer still grapples with the effects of African Swine Fever, a boon to Brazilian exporters. Canton said China's reliance on Brazilian food imports served to adjust domestic meat supplies and helped increase product prices, bolstering Aurora's results and helping the meat sector during the pandemic.

To increase export sales, Aurora is currently seeking three new export permits from China, including two for chicken facilities in the state of Santa Catarina and one for a pork plant in Mato Grosso do Sul, Canton said.