Largest hiring rush since the opening of Horsens 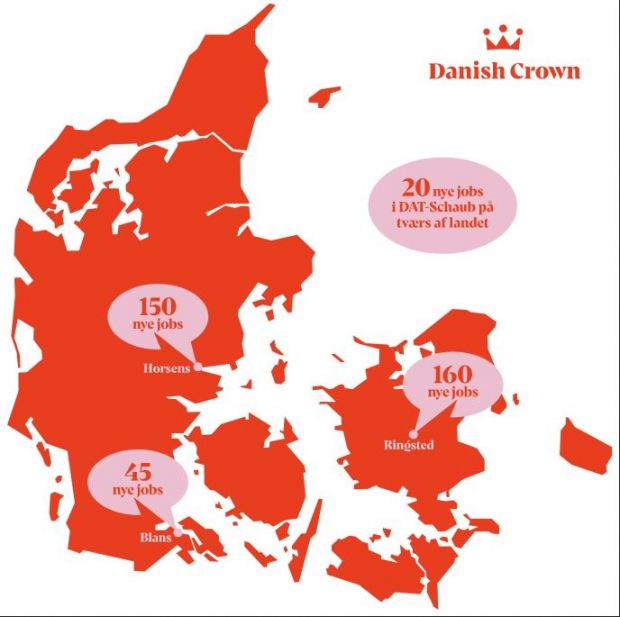 This is the largest recruitment round in Danish Crown since the company opened the new abattoir in Horsens more than 15 years ago.

DENMARK, Randers. Huge Asian demand and more pigs for slaughter makes company hire a total of 375 new employees at three of the group's abattoirs in Denmark.

The demand for Danish pork from countries outside Europe increases, and at the same time there are more pigs in the Danish stables than for a long time. Therefore, Danish Crown needs an epic number of new employees at the Danish abattoirs in Ringsted, Horsens and Blans.

Over the past year, there has been a turnaround in the production of pigs for slaughter in Denmark. Since the New Year, just over 3% more pigs have been slaughtered at Danish abattoirs compared to the same period in 2019. This development now appears to accelerate after Germany was hit by African swine fever in the beginning of September.

Following the outbreak, German export has been barred to most countries outside Europe. Therefore, German slaughter pig settlement is now far below the price Danish Crown pays Danish farmers. In other words, it is now attractive to raise pigs in Denmark, rather than selling them to farmers in Poland and Germany when they weigh around 30 kg. And that change already makes an impact on Danish Crown's forecasts.

“This is the largest recruitment round in Danish Crown since we opened the new abattoir in Horsens more than 15 years ago. We need more people to slaughter, debone and pack our goods. Of course, we hope that we can get some in who have previously worked at an abattoir. However, our expectation is that we will train a large part of the 375 new employees from scratch,” says Per Laursen, Production Director at Danish Crown Pork.

For the past 18 months, demand for Danish pork has been really good, and it has become even greater now that Germany is barred from most markets in Asia.

China is by far the largest market for Danish pork, but Japan, Korea, Australia and the countries in Southeast Asia have also turned their attention to Denmark. For decades, Japan has been an attractive market for Danish pork, and great demand from Japan in particular is the explanation for the fact that most new employees should be hired in Ringsted.