Growing role of fish in feeding the world

Growing role of fish in feeding the world

From Editor fleischwirtschaft.com
Thursday, May 22, 2014 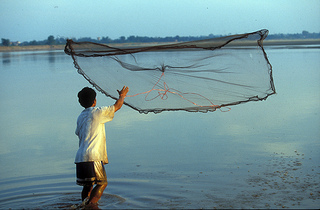 More people than ever before rely on fisheries and aquaculture for food and as a source of income, but harmful practices and poor management threaten the sector’s sustainability, says a new FAO report published today.

Fish farming holds tremendous promise in responding to surging demand for food which is taking place due to global population growth, the report says. At the same time, the planet's oceans – if sustainably managed – have an important role to play in providing jobs and feeding the world, according to FAO's report.

Share of fisheries production used by humans for food has increased from about 70% in the 1980s to a record high of more than 85% (136 million tonnes) in 2012. At the same time per capita fish consumption has soared from 10 kg in the 1960s to more than 19 kg in 2012. The new report also says fish now accounts for almost 17% of the global population’s intake of protein -- in some coastal and island countries it can top 70%.

FAO estimates that fisheries and aquaculture support the livelihoods of 10–12% of the world’s population.

Since 1990 employment in the sector has grown at a faster rate than the world’s population and in 2012 provided jobs for some 60 million people engaged in capture fisheries and aquaculture. Of these, 84% were employed in Asia, followed by Africa with about 10%.

Currently, under 30% of the wild fish stocks regularly monitored by FAO are overfished – a reversal in trend observed during the past few years, a positive sign in the right direction. Just over 70% are being fished within biologically sustainable levels. Of these, fully fished stocks – meaning those at or very close to their maximum sustainable production – account for over 60% and underfished stocks about 10 %.