IGW opened at the CityCube Berlin 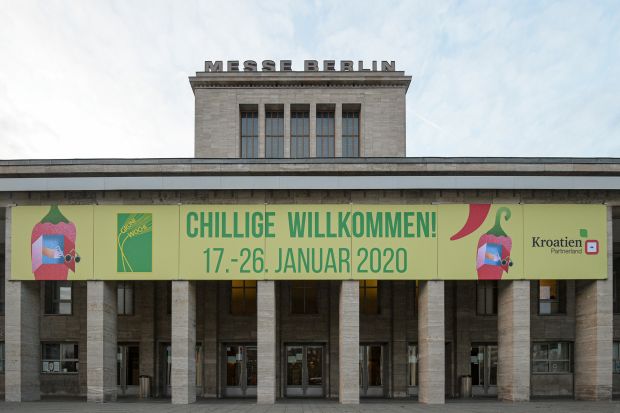 GERMANY, Berlin. The opening ceremony of the International Green Week Berlin 2020 (17 to 26 January) took place yesterday at the CityCube Berlin.


Croatia, the partner country of the fair, organized the programme of cultural events and the reception to follow, to which more than 3,600 guests of honour and delegations from around 100 countries had been invited.

Partner country Croatia’s cuisine will be attracting visitors of the fair with specialities to everyone’s taste, and at the opening ceremony the 3,600 guests could discover this for themselves. Delicacies including kulen and dalmatinski pršut (Dalmatian ham), traditional cheeses, Zagorska purica (Zagorje turkey), olive oils, Croatian wines and a traditional beef dish from Croatian cattle native to Istria await the guests. These are just a few of the fresh products bearing the protected designation of origin label which are processed by Croatian chefs using traditional methods.

In the Croatia Hall (Hall 10.2) gourmets will also have an opportunity to explore traditional Croatian cuisine. Every day, this is where visitors can sample Croatian specialities.

For more than 30 years the “Frische Forum Fleisch” (Fresh Meat Forum), organized by afz and FLEISCHWIRTSCHAFT together with Messe Berlin, has been the political kick-off for the meat industry on the opening afternoon of the Green Week in Berlin. The seminar will once again focuses on current topics in the meat sector.

The whole world is discussing climate protection – and so is the recent Fresh Meat Forum. The industry meeting focuses on the challenging demands of society and the ambitious political goals against the background of their impact on the industry.

The declared political goal in Europe is to be the first climate-neutral continent by 2050. To achieve this, action must be taken now. The meat industry can no longer close its eyes to the discussions. Rather, it is called upon to find solutions together with its partners and the scientific community in dialogue with interested parties. Of course, the agricultural and meat industries will also have to make their contribution to better climate protection. But is it fair to hold them responsible for everything? What must it look like, the meat production of tomorrow? Which path leads to success? How do producers, manufacturers and processors manage the balancing act between climate, environment and resources on the one hand and animal welfare on the other?