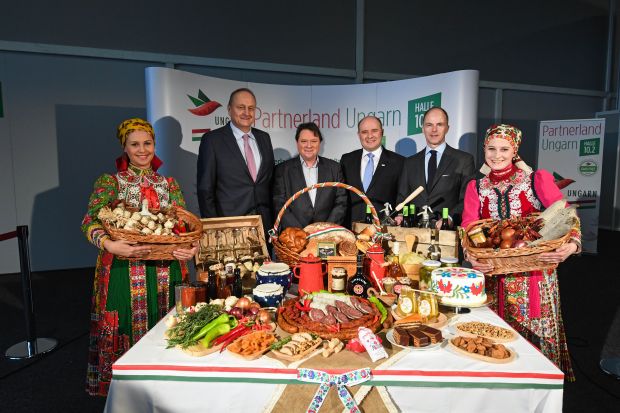 GERMANY, Berlin. The best-attended trade fair in Berlin, and the one with the longest tradition, will be welcoming experts, the trade and the general public from 20 to 29 January. Now taking place for the 82nd time, the International Green Week Berlin 2017 (IGW) provides an overview of the worldwide food industry as well as the largest range of regional specialities to be found at any trade show.

In addition it offers a unique display by agriculture and horticulture along with numerous attractive shows dealing with specialist topics. Hungary is the partner country of the IGW 2017 and is taking part for the 45th time since 1972. A total of 1,650 exhibitors from 66 countries will be inviting the public to experience their products, which also include luxury foods and beverages. With its many exhibits aimed at the professionals, backed up by a programme of conferences, this event serves the entire agricultural sector as a source of information and contacts. All 118,000 square metres of available hall space at the Berlin ExpoCenter City, located around the city’s radio tower, the Funkturm, are occupied. Messe Berlin, the organisers, expect some 400,000 trade visitors and members of the public to attend the ten-day event.

The International Green Week Berlin 2017 is organised by Messe Berlin GmbH. Its non-commercial sponsors are the German Farmers’ Union (DBV) and the Federation of German Food and Drink Industries (BVE).

Messe Berlin has opening times and ticket prices to suit every type of visitor, both for planned and spontaneous visits. The show is open daily to the general public and trade visitors from 10 a.m. until 6 p.m., and from 10 a.m. until 8 p.m. on the ‘Long Friday’ (27 Jan).

Day tickets cost 14 €. Children under the age of six are admitted free of charge. Reduced rates are available for pupils and students, at a cost of ten euros and, as a new feature, for just five euros on the Sundays of the event (22 and 29 Jan.). Each day from Monday to Friday from 2 p.m. Happy Hour tickets are available for ten euros (except Saturdays and Sundays), and Family Tickets (max. 2 adults and max. 3 children up to the age of 14) can be purchased for 29 €. A Sunday Ticket is only valid on 22 or 29 Jan. at a cost of ten euros. These days are ideal for a family outing. A day ticket for groups of 20 or more costs 12 euros per person, and for parties of schoolchildren (school IDs required) the individual charge is four euros. Unlimited admission to the Green Week costs 42 €.

About the Green Week

The International Green Week Berlin is among the longest-running trade fairs in the city as well as one of the best-known events in all of Germany. It can now look back on 91 eventful years and in 2017 the doors will open at the Green Week for the 82nd time. No other international exhibition attracting hundreds of thousands of consumers every year has taken place as many times as the Green Week. Originally just a local product mart, it has grown into the world’s largest consumer show for agriculture, food and horticulture. Since 1926 close to 87,000 exhibitors from around 128 countries have presented their wide-ranging products from all over the world to 32.4 mill. trade visitors and the general public.
Source: Messe Berlin