Consumers do not like calling themselves ‘vegan’ or ‘vegetarian’ 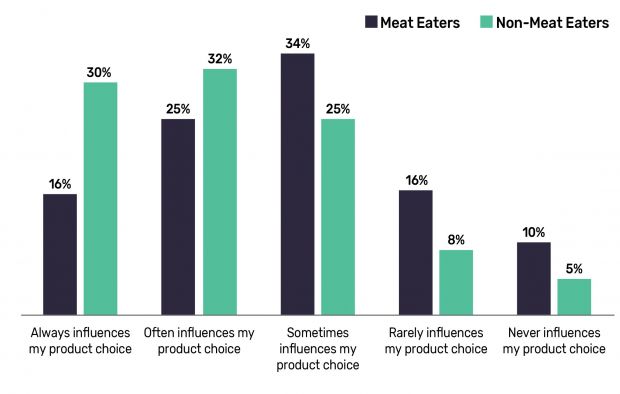 UNITED KINGDOM, London. Consumers tend to shy away from classifying themselves as ‘vegan’ or ‘vegetarian’, because the commitment and the label seems too constraining, says GlobalData a leading data and analytics company.

Companies global consumer surveys in 2017/18 found that a quarter of consumers would consider eating vegan meat for environmental reasons, however, only 2% and 5% of consumers respectively would be willing to describe their diet as vegan or vegetarian, with 23% simply defining their diet as low-meat.

Amira Freyer-Elgendy, Consumer Analyst at GlobalData comments: “People will likely keep eating more plant-based foods and demanding more ethical and sustainability credentials from their food choices, but without formally switching to the dietary labels of ‘vegan’ and ‘vegetarian’, as those come with stigma, commitment and expectations.”

Freyer-Elgendy continues: “From 2016 to 2018, there has been a small increase in how many consumers would consider ethical, environmental or social factors when making food purchases, which points to a quietly growing awareness. This is having a direct impact and influence on the way consumers are buying food. As the flexitarian trend appeals to more consumers, we will see more companies adapting their ranges to meet demand, with more innovation and new product launches in the future.”