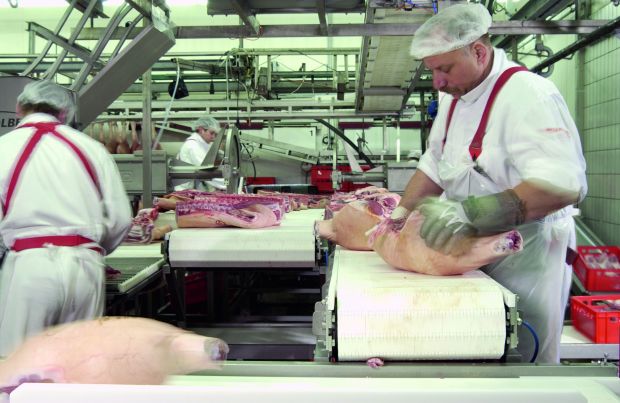 GERMANY, Berlin The German meat industry remains buoyant despite all the turbulence. This was confirmed by State Secretary Peter Bleser as he addressed industry representatives at their annual conference in Berlin. The numbers of slaughtered cattle and pigs increased and production output also grew.


The meat industry associations have given 2014 a positive overall rating. Both meat production and the production of meat products and sausage increased, as VDF Chairman Paul Brand and BVDF President Dr. Wolfgang Ingold reported at the combined industry conference.

Despite the ever-louder discussion surrounding new nutritional developments, the slaughter and cutting sector companies together with the processing industry have succeeded in tapping into new markets now that access is barred to the Russian market.

According to State Secretary Bleser (CDU), the Federal Ministry of Food and Agriculture holds the meat industry in high regard. It has succeeded, he said, in remaining globally competitive, despite ever increasing demands being placed on the companies in terms of animal welfare and changing consumption habits.

It is now important for the industry to diversify into new markets, and to exploit the strong reputation enjoyed by German products all over the world. The Ministry will support the meat industry by encouraging exports, he said. This is a matter which Bleser himself promises to attend to.

He urged company owners to counter consumers' mistrust of the food industry by taking trust-building action.

Beef production increased again in 2014, whereas the number of slaughtered pigs only rose slightly by 0.2 per cent to 58.7 million animals in comparison to the previous year. At 3.6 million units, 1.9 per cent more head of cattle were slaughtered than in 2013.

The meat products industry posted an overall growth in production in 2014. There was a slight year-on-year increase of 0.7 per cent in the production of scalded, pre-cooked and dry sausage. In the previous year the meat processing sector had posted a 1.1 per cent downturn in the industrial production of meat products.

The German meat products industry manufactured a total of 1,469,259 tonnes of sausage products. Key product areas such as the manufacture of dry-cured or boiled ham are not included in the official statistics. Discount supermarkets account for roughly 44 per cent of the sausage products sold in Germany. Sales of the German meat products industry rose by 3.38 % to € 18.16 billion in 2014.

The German meat industry maintained and even improved upon the already high level of exports by selling over 4.2 million tonnes of products abroad in 2014 (+3.7 %). Export earnings, however, fell by just under 2 % to approx. € 9.6 billion as a result of the low raw materials prices.

According to provisional figures, the quantities of fresh and frozen pork rose by roughly 0.6 % to a total of 1.742 million tonnes. EU member states accounted for 83 % of exports.

Exports to China saw a further increase to 83,000 t. The largest growth was accounted for by deliveries to Korea which rose by over 36,000 t to more than 66,000 t. The third largest client country outside the EU is the Philippines at 30,000 t (an increase of 19,000 t). Furthermore, the quantity exported to Japan rose by almost 130 % to 13,000 t.
tags:
Germany EU Peter Bleser Berlin Paul Brand Wolfgang Ingold CDU