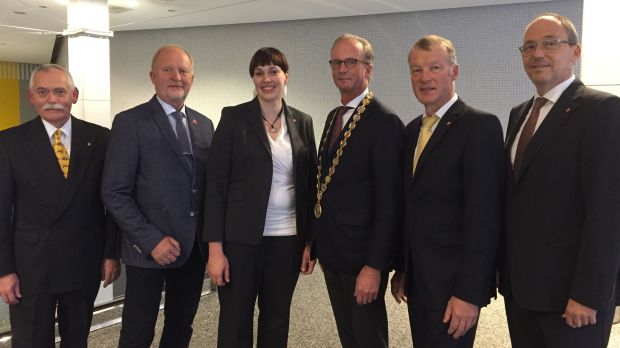 GERMANY, Saarbrücken The new President of the German Butchers' Association (DFV), Herbert Dohrmann, outlined his priorities for the next five years in Saarbrücken.


Chief among these are intensifying communication on the challenges and ultimately arriving at common solutions through discussion.


Dohrmann called upon everyone at the General Assembly to take active part in the discussions. It is crucial for the concerns of the craft butcher sector to be expressed and presented more effectively to the general public and the government, he said.

Ensuring new generations of butchery professionals is one of Dohrmann's top priorities. This includes continuing to develop the Fox award-winning fleischerberufe.de young talent platform. He also intends to focus on new approaches in vocational training. A further priority is intensifying the partnership established last year with the farming sector in the spirit of his predecessor, Heinz-Werner Süss, after all: "Everything that the farmers do, affects us, too ". The new President would like to engage in dialogue with the German Animal Welfare Association (Deutscher Tierschutzbund) and with the consumer advice organisations. His goal is to play a decisive role in shaping policy. "Consumers should be our best friends."

For the association itself, Dohrmann is planning to develop ideas regarding what the butcher's shop of the future might look like. This requires embracing progress in the form of digitisation. The organisational structure also needs to be reformed.

The German Butchers' Association is not only well connected for the future - as witnessed by the motto of this year's conference in Saarbrücken - but also rejuvenated. The General Assembly elected the DFV steering committee for the coming five years on Monday. The new President is Herbert Dohrmann from Bremen (3rd from right); he will be supported by his two deputies Michael Durst from Hamburg (2nd from right) and Eckhart Neun from Hesse (2nd from left). The committee is completed by Konrad Ammon Jr. from Bavaria (left) and Nora Seitz from Saxony, the first woman in such a senior position within the federal association. On the right is the DFV CEO Martin Fuchs.
tags:
DFV Herbert Dohrmann Saarbrücken Herbert Daniels Germany