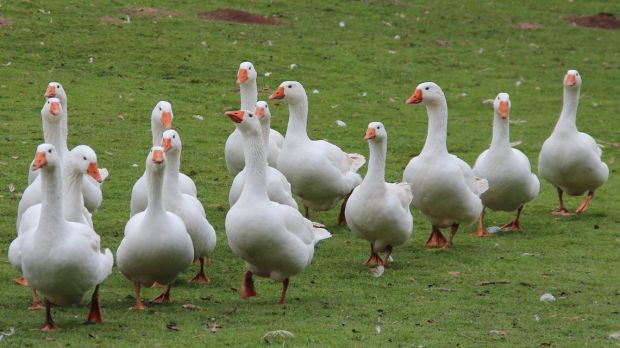 FRANCE, Paris. A sign which reads, ''Disinfection area'' hangs from a chain at a duck farm in Montsoue, France in January, as France continues a massive cull of ducks in three regions most affected by a severe outbreak of bird flu as it tries to contain the virus which has been spreading quickly over the past month. This was reported by Reuters.

About 330,000 tonnes of animal feed will not be needed in France this year due to the bird flu outbreak that has led to the widespread culling of duck flocks and an order to partially halt poultry rearing to stop the virus, animal feed industry group SNIA said.

France has been among the European countries most severely hit by the highly contagious H5N8 bird flu virus that has spread since late last year and decimated duck flocks in large parts of southwestern France, home to foie gras producers. Nearly 10 million ducks have died, been culled or will not be reared because of a government decree to leave farms empty until the end of May in the most infected regions, foie gras producers' group Cifog estimates.

This would lead to a drop in demand for animal feed of between 240,000 and 250,000 tonnes, including maize (corn) - the main component of duck feed - and compound feedstuffs, SNIA economist Bruno Toussaint told Reuters. Maize growers had said last month that the fall in demand for the grain due to bird flu would be about 150,000 tonnes.

The crisis has also hit the chicken industry with an estimated drop in output of 13.4 million chickens, including 10 million produced under special labels and 3.4 million standard chickens, Anne Richard, head of poultry institute ITAVI told Reuters. That compares with the country's production of 755 million chickens last year.

The smaller chicken flock would lead to a drop of another 80,000 tonnes in demand for animal feed, bringing the total drop in animal feed demand due to bird flu this year to about 330,000 tonnes, SNIA said. France produced 20.4 million tonnes of animal feed in 2016.

Chickens are less prone to H5N8 but farmers near infected duck farms had to cull their birds and stop rearing to avoid a spreading of the virus.