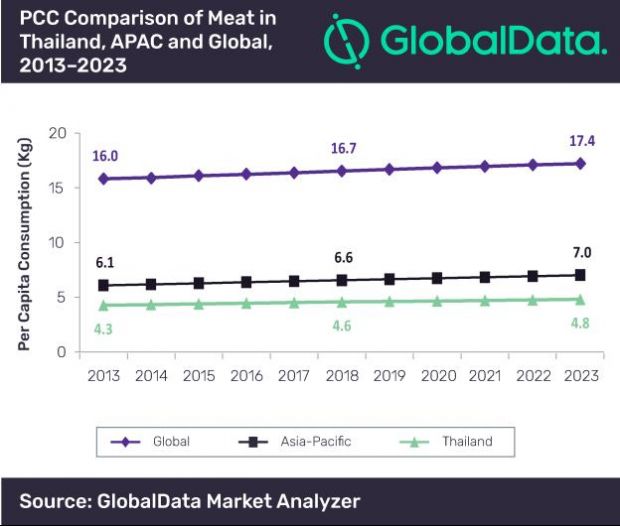 Photo: Global Data
According to the report, the per capita consumption (PCC) of meat, which is low in Thailand compared to both APAC and global levels, is set to marginally increase from 4.6kg in 2018 to 4.8kg by 2023.
Related Topics:

fleischwirtschaft.com — UNITED KINGDOM, London. A steady economic progress, supported by growing public investments and private consumption, is driving the Thai meat sector, which is expected to grow at a compound annual growth rate (CAGR) of 4% from $ 1.7bn. in 2018 to $2.1bn. in 2023, says GlobalData, a leading data and analytics company.
Facebook
Twitter
GlobalData’s report, ‘Country Profile: Meat in Thailand’, reveals that fresh meat available in retail counters held the largest value share of 49.8%, followed by the chilled raw packaged meat – whole cuts category, which accounted for a share of 18% in 2018.

The company predicts the processed chilled raw packaged meat category to register the fastest value CAGR of 5.4% during 2018–2023, followed by counter cooked meats with a value CAGR of 5.2% during the same period.

Betagro Co., Ltd, Saha Farms Company and Thai - German Meat Product Company Limited were the leading market players in the Thai meat sector while S-Pure, Saha Farms and Tgm were the top brands. Due to well-developed distribution network of hypermarkets and supermarkets coupled with positive perception of consumers, private label products accounted for an overall penetration level of 20.6% in 2018.