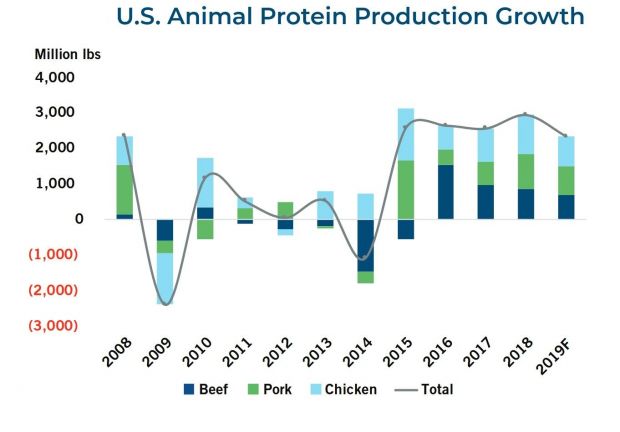 USA, Greenwood Village, CO. Cobank’s latest report named “The Year Ahead: Forces that will Shape the U.S. Rural Economy in 2019” gives a forecast of the developments in the animal protein sector.


In 2018, the US animal protein sector began suffering from the same oversupply and weak margins that have plagued US dairy producers since 2015. Despite the less favorable profitability environment, the protein and dairy sectors will continue to expand production in 2019, prolonging the margin squeeze.

Animal protein production has climbed by an average of 3% per annum, but exports have grown at twice that rate, softening the impact.

Export growth will slow in 2019 as competitors begin take advantage of free trade agreements with some of the US’s most important animal protein customers.

Demand for animal protein and dairy, both domestically and internationally, has been strong since industry growth turned upward in 2015. Per capita meat and poultry consumption has returned to the all-time peak set in 2006 prior to the Great Recession and run-up in grain prices. In 2019, consumption will surely set a new record albeit at lower prices, especially in the pork and poultry sectors.

US animal protein production growth should continue its steady trend of growth as well, driven by strong cheese and butter consumption. Of the three major animal protein species, beef appears to be weathering the animal protein oversupply situation best, with favorable fed cattle prices and historically high packer margins resulting from tight processing capacity. Retail beef demand has held quite strong with beef premiums over pork and poultry at all-time highs of late. Modest beef supply growth in 2019 should keep this trend alive through the year. The most likely risk to beef’s favorable position is the risk of a US economic recession in late 2019 or 2020 which would likely bring beef prices back in line with historic averages.

Conversely, the pork and poultry sectors reflect the impact of plant expansions which will deliver double-digit increases in processing capacity for both species by 2020. Most of the new pork plant capacity was added in 2017 and 2018 and poultry will see its significant capacity expansion in 2019.

With labor availability being the major concern for US animal protein and agriculture in general, plants with especially difficult labor conditions will be looked at closely for possible closure.