Forecast: How will cultured meat and alternat...
Forecast

How will cultured meat and alternatives disrupt the industry? 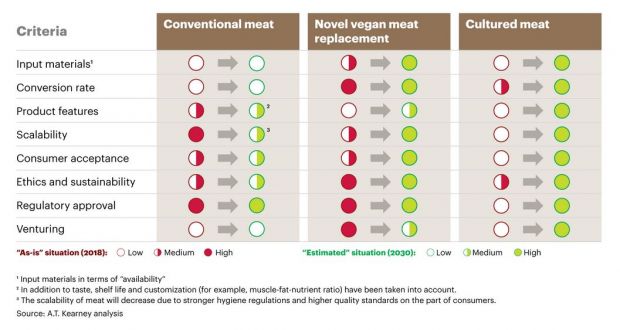 USA, Chicago. Meat alternatives have the potential to disrupt the multibillion-dollar global meat industry. The essential questions, however, are which of those new products have the most disruption potential, what are the resulting shifts within the value chain, and who will benefit most?


The global population—which was around 7.6 bn. in 2018—is projected to increase to around 10 bn. by 2050. To sustain all these people, a massive amount of food is required. However, according to the Food and Agriculture Organization of the United Nations (FAO), nearly half of the worldwide harvest is required to feed the livestock population, which consists of about 1.4 bn. bovines, 1 bn. pigs, 20 bn. poultry, and 1.9 bn. sheep, lamb, and goats.

Given the enormous global harvest needed to feed our livestock, the size and impact of the global meat industry should not come as a surprise. Ultimately, the meat chain is part of the global food chain, which has an estimated value of 10% of global GDP or $8.8 trillion for 2018 in absolute numbers.

Even though the total meat value chain has a size of around $1,900 bn., meat replacements will primarily disrupt the agricultural and conventional meat industry with a total value of around $1,000 bn. FMCG and retailers sell end products, be it meat or meat replacements, to end-consumers and are less affected—if at all—by new products and changing customer behavior.

The global agriculture and meat industry faces enormous challenges to meet the growing global meat demand while transforming to a more sustainable meat system. In a world where arable land is shrinking due to global warming and sprawling cities and can only be expanded at the cost of losing valuable natural habitats such as rain forests, it’s hard to justify expanding acreage used to produce feed. Both effects—shrinking arable land and rising human population—lead to a worldwide reduction from 0.38 hectare per capita in 1970 to around 0.15 hectare per capita in 2050. A further intensification of agricultural production is reaching its limits—the downsides of the current industrialized farming practices are already clearly visible. Moving from field to feedlot, additional challenges of conventional meat production surface, from antibiotic use to zero-tolerance for animal harm.

To this point, the agriculture and meat industries have, for the most part, tried to address their challenges by further increasing efficiency of the conventional production methods. However, improving efficiency of conventional methods is not enough in the long run to cope with the pressing challenges of our food system. In addition, all the above-mentioned solution approaches have one aspect in common: they do not disrupt the conventional method to produce meat but rather incrementally improve it.

The total market for plant-based meat alternative products was around $4.6 bn. in 2018, with a growth projection of 20 to 30% per year (depending on region) for the next several years. As this represents a small fraction of the $1,000 bn. global meat market, a lot of upside potential remains.

At the current stage, it is hard to tell how fast the disruption will come about. However, one can already observe how wholesalers, retailers, and consumer goods companies are trying to find a lucrative starting position by purchasing exclusive distribution rights or through acquisition of start-ups (for example, Tesco bought distribution rights for the Beyond Meat Burger). Therefore, A.T. Kearney has qualitatively forecasted the development of the meat market until 2040 based on reliable economic data as well as on their research and conversations with numerous experts in the field.

Based on A.T. Kearney analysis, around one-third of the global meat supply will be provided by these new technologies within the next 10 years. It is noteworthy that the demand for conventional meat declines by 3% despite a global increase in meat consumption of 3% per year. Novel vegan meat replacements will show a strong growth in the transition phase (until 2030), whereas cultured meat—with an annual growth rate of 41% per year—will outgrow novel vegan meat replacements between 2025 and 2040 due to technological advancements and consumer preferences.

All in all, cultured meat and new meat replacement products are going to disrupt the $1,000 bn. conventional meat industry with all its supplier companies. This disruption is supported by a general shift toward consumption of non-meat proteins (for example, legumes and nuts) as a consequence of new lifestyle trends, all aimed at a more sustainable and healthier diet, as well as regulatory measures against conventional meat. Already today, we can observe the formation of a new customer segment made up of “passionate meat eaters” who take care of their diet but for whom a vegan or vegetarian diet is still not an option. In this context, the discussion about cultured meat as well as meat replacement products and how they can be produced in terms of large-scale batches at attractive prices may seem very technical and unemotional.