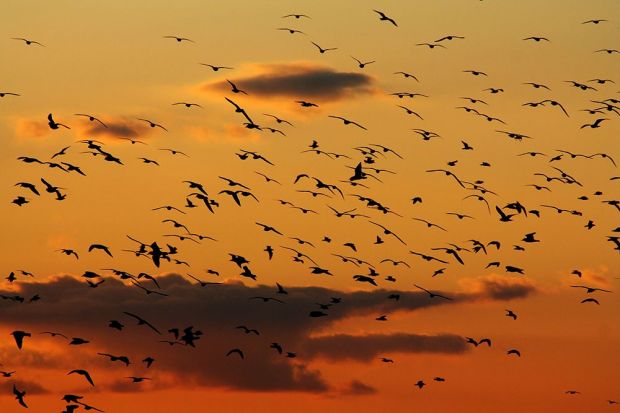 
The recommendation follows new research from 32 institutions worldwide that shows migrating birds can help to spread deadly strains of avian flu around the world. Researchers investigated how a subtype of bird flu called H5N8 spread around the world following outbreaks in South Korea that began in early 2014. The virus spread to Japan, North America and Europe, causing outbreaks in birds there between autumn 2014 and spring 2015.

Scientists analysed migration patterns of wild birds that were found to be infected with the H5N8 virus. The team then compared the genetic code of viruses isolated from infected birds collected from 16 different countries.

Their findings reveal that H5N8 was most likely carried by long-distance flights of infected migrating wild birds from Asia to Europe and North America via their breeding grounds in the Arctic. The researchers say their findings reinforce the importance of maintaining strict exclusion areas around poultry farms to keep wild birds out. Greater surveillance of wild birds at known breeding areas could help to provide early warning of threats of specific flu virus strains to birds and people, they add.

Lead author Dr. Samantha Lycett, of The University of Edinburgh’s The Roslin Institute, said: “Bird flu is a major threat to the health and wellbeing of farmed chickens worldwide. Our findings show that with good surveillance, rapid data sharing and collaboration, we can track how infections spread across continents.”