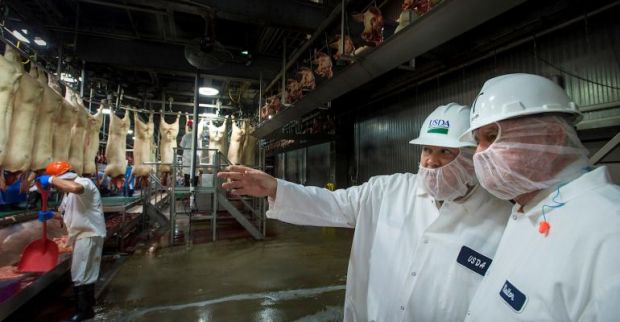 fleischwirtschaft.com — USA, Washington, DC. In its 2020 highlights, the US Department of Agriculture’s Food Safety and Inspection Service summarized the complex challenges and accomplishments throughout the coronavirus (COVID-19) pandemic.
Facebook
Twitter
The FSIS summary outlined its progress in modernizing its operations and protecting public health by preventing foodborne illnesses. “This has been a challenging year, but FSIS has continued moving forward with its food safety mission,” said Mindy Brashears, PhD, undersecretary for food safety. “FSIS employees stepped up to ensure that safe and wholesome food continued to be on the American dinner table.”

According to its summary, during the 2020 fiscal year, FSIS officials inspected nearly 9.68 bn. poultry carcasses and more than 166 mill. head of livestock. During the year, inspectors carried out about 7.3 mill. food safety and food defense procedures in 6,500 federally inspected US plants where poultry, meat and eggs are produced.

Following the pandemic outbreak, FSIS said it allowed inspectors in high-risk health categories to self-certify with supervisors and were excused from inspection duties with full pay until personal protective equipment (PPE) was made available. The agency held multiple weekly town hall calls with senior leadership and responded to nearly 1,000 feedback emails. FSIS also hosted calls with all FSIS-regulated establishments to address pandemic questions.

FSIS allowed temporary labeling flexibility through the end of 2020 since many facilities were redirecting products from foodservice locations to retail. With the labeling approval process changes, the agency said it took five to seven days, compared to a much longer time in previous years.