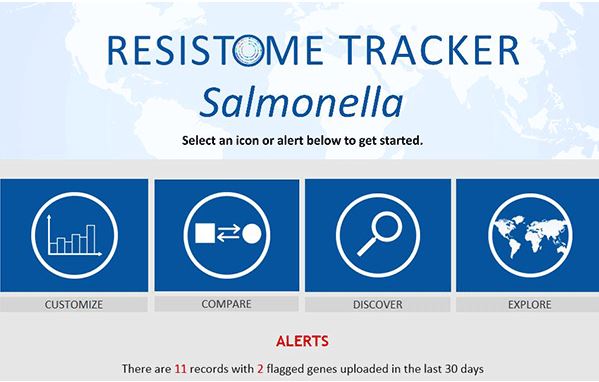 Resistome Tracker is an interactive research tool that allows users to visualize the distribution of antibiotic resistance among genomes deposited in the NCBI public databas.

Whole genome sequencing (WGS) enables researchers to determine the complete DNA sequence of a bacterium, providing a wealth of information on different traits in microorganisms that could not easily be uncovered previously. FDA scientists have used these new sequencing technologies to show that for the bacteria targeted in the National Antimicrobial Resistance Monitoring System (NARMS), antibiotic resistance can be predicted with a high degree of confidence from the DNA sequence (McDermott, et al., Zhao et al). This means that we can now track antibiotic resistance in foodborne bacteria where traditional laboratory resistance data are not available – just by examining the DNA. The tool also provides alerts about new resistance traits as they emerge in a region or source to provide early warning on emergent trends. Resistome Tracker represents a major step forward in resistance monitoring that will enhance the scientific foundation for the FDA and others when evaluating the impact of antibiotic use on the evolution and spread of resistance.

Currently, Resistome Tracker is focused on antibiotic resistance genes in Salmonella. Salmonella genome sequences from the National Center for Biotechnology Information (NCBI) public databases are uploaded to Resistome Tracker on a weekly basis, allowing near real-time monitoring of antibiotic resistance. Presently, Resistome Tracker includes WGS data on 97,390 genomes from NCBI, 27,512 of which are U.S. isolates and 8,900 are isolates from the NARMS. Future iterations of the tool will include data on other microorganisms such as E. coli and Campylobacter as well as additional gene categories such as serotype, sequence type and virulence genes.