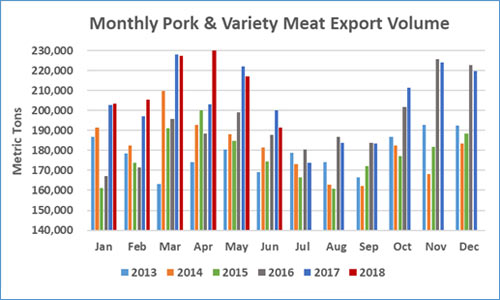 USA, Denver. Strong June results capped a huge first half of 2018 for U.S. beef exports, according to data released by USDA and compiled by the U.S. Meat Export Federation (USMEF). June pork exports were lower than a year ago for the second consecutive month, but first-half volume and value remained ahead of last year’s pace.


Beef muscle cut exports set a new volume record in June of 90,745 t, up 15% from a year ago. When adding variety meat, total beef export volume was 115,718 t, up 6%, valued at $718.4 mill. – up 19% year-over-year and only slightly below the record total ($722.1 mill.) reached in May. First-half exports set a record pace in both volume and value as international customers bought a larger share of U.S. beef production at higher prices, indicating strong demand. Export volume was up 9% from a year ago to 662,875 t while export value was just over $4 bn., up 21%. In previous years, export value never topped the $4 bn. mark before August.

June exports of U.S. lamb were the largest of 2018 in both volume (1,016 t, up 58% from a year ago) and value ($2.2 mill., up 26%), pushing first-half exports 46% ahead of last year’s pace in volume (5,471 t) and 17% higher in value ($11.3 mill.). Stronger variety meat demand in Mexico accounted for much of this growth, but muscle cut exports trended higher to the Caribbean, the United Arab Emirates, Canada, Singapore, the Philippines and Taiwan. Exports should receive an additional boost in the second half of the year from Japan, which reopened to U.S. lamb in July.