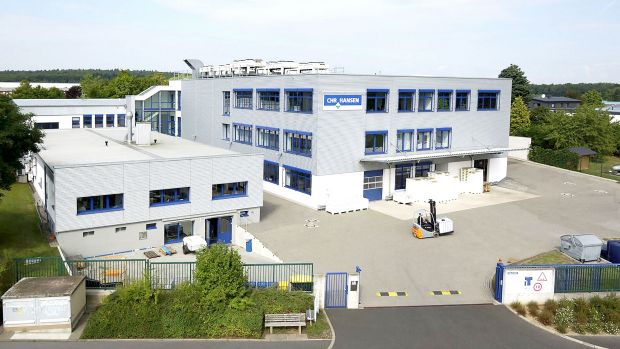 GERMANY, Pohlheim The Danish biotechnology company Chr. Hansen A/S, headquartered in Copenhagen, is expanding its operations in Pohlheim in Hesse.


The company has purchased a 2500 square metre plot of land adjacent to the current premises with the aim of expanding the production area by 40 per cent in the next few years. This was announced by Managing Director Thomas Reiner of Christian Hansen GmbH Deutschland during the 50th anniversary celebrations at the Pohlheim site.


Chr. Hansen produces micro-organism cultures, enzymes, probiotics and natural colours for the production of food, and for human and animal nutrition. A team of roughly 70 employees creates starter cultures including those used in the production of fermented meat products such as dry sausage or smoked ham. "If you eat an artisan pizza with salami on it, there is a more than 50 per cent chance that it contains cultures from Chr. Hansen," pointed out Reiner in his speech. The company produces over five million containers of cultures per year, and sells more than 280 different products around the world.

The micro-organism cultures are created as the result of extensive global research and development activities which, for the meat sector, are concentrated in Pohlheim. The guests at the event were able to see this for themselves on guided tours and a "Tour of International Tastes". This tour included an exhibition of 16 countries from five continents, where the Hansen products are used to create pepperoni from Australia, lap cheong from China, bacon from the United States, Moscovskaya from Russia or filet américain from the Netherlands could be sampled.

Ole Andersen, Chairman of the Danish Supervisory Board, described the takeover of the Pohlheim company (originally founded in 1966 as "Rudolf Müller & Co.") as "one of his group's most successful acquisitions". In 1991, founder Wolfgang Müller placed his life's work into the hands of the financially powerful partner Danish partner as a means of funding scientific advances in the technology and retaining staff expertise in Pohlheim. He had originally chosen the site on account of its proximity to the University of Gießen and the Technical University as well as its central location in Germany.