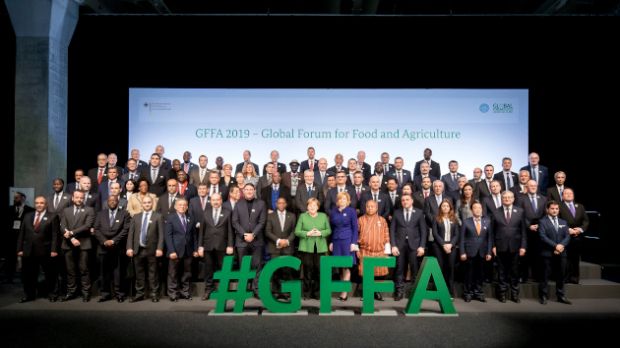 Over three days, around 2000 international visitors from politics, business, science and civil society will discuss the use of digital technologies in agriculture at GFFA.


Over three days, around 2000 international visitors from politics, business, science and civil society will discuss the use of digital technologies in agriculture at GFFA. There will also be the world's largest conference of agriculture ministers, the highlight of the Global Forum for Food and Agriculture (GFFA).

GFFA is a firmly established international conference on key future issues in the areas of food and agriculture. It takes place annually at the beginning of the International Green Week.

At the invitation of Federal Minister of Agriculture Julia Klöckner, Federal Chancellor Dr. Angela Merkel spoke in Berlin in front of some 70 agriculture ministers from all over the world about "digitisation in agriculture".

The Chancellor said: "The fight against hunger will play a central role in the coming years. A world without hunger is one of the goals. They are here today to bring together seemingly irreconcilable things: the fight against hunger and the fight for a conscious use of resources. For both, digitisation is much more an opportunity than a risk. We can see that climate change is changing our conditions. Certain plants no longer thrive as they did 100 years ago - even here in Germany. Climate change is an ecological challenge of our time. And here, too, digitization can help."

During the press conference on the German animal welfare label, Andriukaitis said: "Only a few days ago we received the German law on notification. Give us some time to look at it in detail. I am responsible for animal welfare, so I am also responsible for taking all measures that help us to improve animal welfare - including a label. One aspect is of course important when we talk about voluntary labelling in general: That is compliance with the rules on the European internal market.”