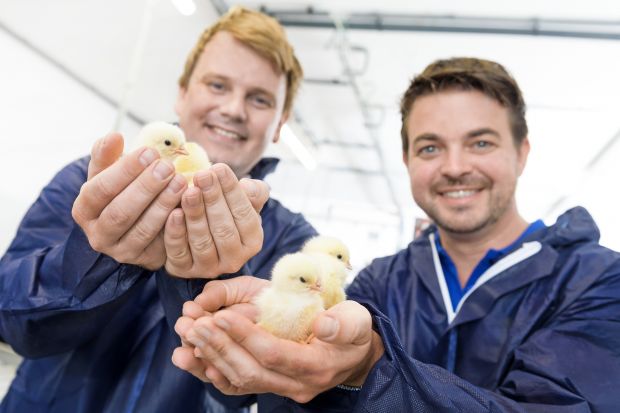 Wouter Bruins (left side) und Wil Stutterheim (right side) are the founders of In Ovo.

GERMANY, Essen. Evonik has invested in the biotechnology start-up In Ovo through its venture capital unit and now holds a minority stake in the company, based in Leiden (The Netherlands).

Co-leading this Series A investment is Singapore-based venture capital fund, VisVires New Protein. Along with the participation of Leiden University this brings the total financing round to an investment of several million.

“In Ovo has taken on one of the biggest ethical problems in modern poultry farming,” says Bernhard Mohr, head of Venture Capital at Evonik. “This investment strengthens Evonik’s position as a partner of choice for the farming industry as we can provide support for ethical food production.”

In Germany alone, an estimated 40 mill. day-old male chicks from laying-hen hatcheries are killed annually, and the global figure is thought to be 3.2 bn. Poultry farms don’t rear the male animals because they can neither lay eggs nor put on sufficient flesh for meat production. In Ovo has developed a method for determining the sex in the egg that is particularly fast and reliable and can be readily integrated into the workflow of large hatcheries. The technology is being combined with a system to process the large number of eggs to be screened. In large hatcheries about 100,000 eggs must be analyzed daily.

“In Ovo is an excellent strategic fit for Evonik’s existing business,” says Emmanuel Auer, head of the company’s Animal Nutrition business line. “This commitment will sustainably strengthen our Animal Nutrition growth engine by allowing us to expand our presence in the egg-producing sector.”

Evonik products and services in the field of animal nutrition play a key role worldwide in the production of healthy and affordable food with conservation of natural resources and a reduced ecological footprint. The company is a leading global supplier of amino acids and their derivatives for advanced animal nutrition and is systematically expanding its product range in the direction of sustainable and healthy animal nutrition.

In Ovo was founded in 2013 by biomedical scientist Wil Stutterheim and biologist Wouter Bruins, who met at the University of Leiden. The technology is based on biomarkers identified by the founders; these allow the gender of chick embryos in the egg to be accurately determined early after fertilization. For this purpose a tiny, easily resealable hole is made in the egg—this has for many years been standard procedure for inoculation of chick embryos in the egg. A sample is then taken and examined by mass spectrometry for the biomarker identified by In Ovo, which has already been patented. The company plans to use the invested capital to develop the technology to the stage where it can be applied on the commercial scale in hatcheries.

Over the next few months the founders plan to work with German and Dutch partners to develop a prototype that can rapidly and reliably analyze and sort large quantities of eggs. On the laboratory scale, In Ovo currently needs one second for the analysis of an egg. This rate is now to be accelerated to a few microseconds per egg. The company will also use already available and proven technologies for sorting and handling large quantities of eggs. The first commercial product is expected to be launched on the market in 2020.