No nature without animals 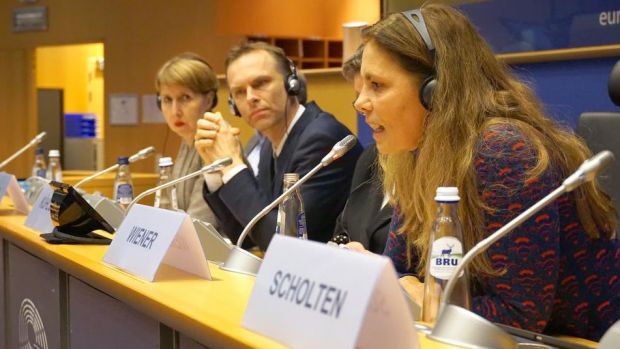 Not against animals, but against the suffering of animals: MEP Sarah Wiener (right) on the podium of the European Meat Forum together with Dr. Anne Sander and Prof. Dr. Frédéric Leroy.

BELGIUM, Brussels Europe's butchers are receiving help from a high-profile source in their quest for greater appreciation.


We do not need to abolish the entire system of livestock farming in order to return to sustainable cycles. But we do need to change it and use the resources more intelligently. This was one of the key findings at the European Meat Forum in Brussels last week. The International Butchers' Confederation (IBC) invited MEPs, lobbyists and scientific experts to the European Parliament for the 21st Forum. This year's topic was the role of meat in a changing world.


A prominent guest in the podium discussion (led by Renate Kühlcke, editor-in-chief of "Fleischwirtschaft") was Sarah Wiener. The TV chef has represented the Austrian Green Party in the European Parliament since the beginning of the current legislature. She is known for her critical attitude towards meat produced in factory farming. She does not, however, see abolishing livestock farming as a solution to the debate on meat production and consumption. "We do not need to get rid of the animals themselves, merely their suffering," said the MEP.

Scientific support for Wiener came from Dr. Martin Scholten of Wageningen University. "Responsible agriculture is the only type of agriculture with a future," said the Dutchman, who also emphasised the role of animals in the food cycle. Animals eat plants, and their manure serves as fertiliser – in which context the question of how food production can be used to capture nitrogen or carbon dioxide takes on new relevance. Here, Scholten drew a comparison with the car industry, which is also attracting negative headlines: "We know cars pollute the air. But we are not banning them altogether, we are developing a new generation of automobiles that do less harm to the environment."

Sarah Wiener showed herself to be a true fan of the butcher's trade, reporting that she regards herself as a food entrepreneur. Her Kerkow farm estate on the border of the Uckermark region has its own slaughterhouse and produces its own meat and sausage. "We have even started processing freshly slaughtered meat again," said the co-owner of the farm, giving the butchers an insight into "her butcher's shop".

The TV chef advised them to tell the world what great things they are doing. The craftsmen should reclaim their pride – and be paid good money for doing so. The expert Scholten takes a similar view: as the link between producers and consumers, butchers are best placed to explain what tastes good, is high quality and why this is so. "That's the advantage you have over the anonymous meat in the self-service counters." A well-told story can add value to food. In the ensuing discussion, Martin Fuchs, Managing Director of the German Butchers' Association (DFV) and Secretary General of the IBC, also issued a plea for greater appreciation of the food trade and its products, especially in the current political debate.

Prof. Dr. Frédéric Leroy from the University of Brussels (VUB) rejected the suggestion that science could help enhance the profile of meat as a food. Nonsense always spreads quickly among the population, he said, however it is much more difficult to achieve any progress using scientific arguments. "People want to understand the value of food," said the technologist. But science is only effective in the background.

"One of the main attractions of Europe lies in the diversity of its products." This is how event patron, Dr. Anne Sander, responded to nutrition-based criticism of meat and sausage and the resulting efforts to create "healthier" products which contain less salt and fat but more fillers. It is important to preserve this diversity, she said. The French MEP (EPP) hopes that reason and a balanced political discourse instead of hysteria will be the order of the day in the new legislature on this issue and on the future direction of agriculture.