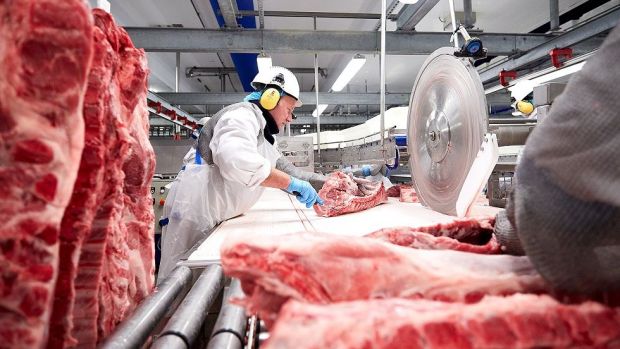 The pig sides are delivered to the Colruyt Group meat factory where they are cut up.


"Long-term and sustainable thinking" is the motto of one of the largest food chains in Belgium. It is implemented throughout the company. And it is a successful policy, as is repeatedly underlined by Colruyt's unconventional development as the result of its innovative ideas. The tradition stretches back several decades.

The company, which grew from a small family bakery, has long been committed to sustainability. It is willing to engage in unusual projects and is always on the lookout for successful ideas from sectors that at first glance have nothing to do with food production. An example of this is a project dedicated to the consistent saving of service water. Farm animal effluent does not simply flow into the sewage system, but is treated in the company's own water treatment plant, allowing it to be returned to the cycle. The idea came originally from a Hollywood film about an astronaut stranded on Mars. The crew of the ISS space station, too, can manage on a minimum quantity of water thanks to the closed system.

And because meat production requires such great quantities of water each and every day, the system represents an ideal solution – including here on Earth. According to the company's experts, the technology for full recycling is already available and not reserved exclusively for the crews of space stations. In Belgium, the pilot project succeeded in saving more than 80,000 m3 of tap water. This is roughly equivalent to the amount consumed by 920 families in their bathrooms and kitchens. 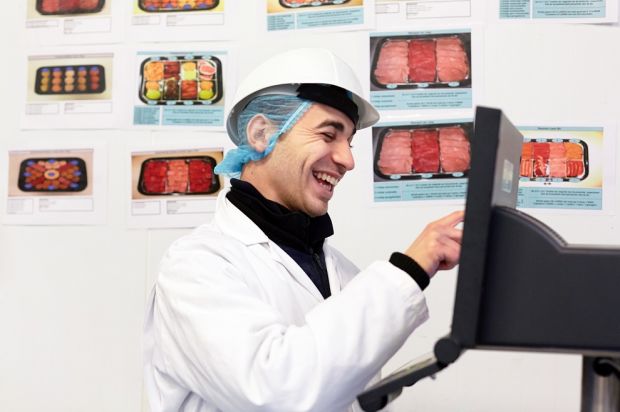 Colruyt
Production management and quality control help ensure efficiency and safety.
Much of the recycled water is used as service water for cleaning the production area in the company's cutting and production halls. More than 50 per cent of the water requirement can now be met in this way. In addition to the cost savings, it also relieves the strain on the municipal wastewater treatment plants and the groundwater level.

It all began with a rainwater treatment plant which went into operation in 2014 to provide drinking-quality water. The water which leaves the special filter systems has at least the same quality as that from the municipal water provider. It is subjected to regular sampling and testing.

The system will also be used in the new meat factory building, where the manufacture of meat and sausage products began in 2016. The rainwater collection and treatment plant converts around 10,000 m3 of rainwater into potable water every year. This is statistically equivalent to the consumption of 120 families. And the same applies to the use of energy. The new fine food production facilities are now largely self-sufficient and can generate their own electricity. The wind turbine (and generator) is located very close to the production halls; its height make it an unmissable landmark.

Forward-planning and the clear focus on sustainability provide an energy supply that is almost fully independent and remains operational even during windless periods. In contrast to photovoltaic systems (which are also used), wind power is a natural source of energy which can also be exploited at night. 4,500 square meters of solar collectors were installed on the production hall roofs. The goal of combining economy and ecology has been achieved.

The philosophy, however, goes beyond simply meeting organic standards. "Thinking ahead" is the policy of the group of companies that has grown from the humble beginnings of a family bakery into one of the major food manufacturers in Belgium and that is constantly developing. The group uses imaginative solutions to combat the price pressure of this fiercely competitive industry.

Constantly adapting to consumer requirements led to the creation of a comprehensive production range and the establishment of a wholesale division. The company's growth is based on continuous adaptation. From 1900 to 1930 the bakery was the main focus, followed by the addition of wholesale business; from 1955 to 1997 the discount business played a major role; it was eventually replaced by the current retail group. 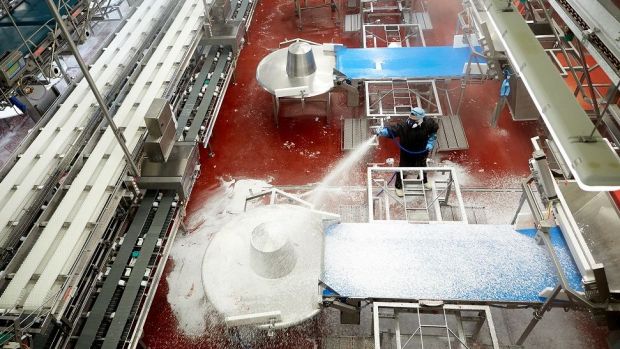 Colruyt
Even cleaning and disinfection water is saved.
It has produced meat, meat products and sausages since 1950. Only Belgian Blue cattle are slaughtered and processed. The company processes 11,000 bulls, 6,500 calves and 450,000 pigs each year. The poultry which is produced and processed (around three million chickens per year) is also marketed in France. There is a total workforce of 950 in production, with the group as a whole employing a staff of around 30,000. The figures speak for themselves: the sales target for the current year is an impressive EUR ten billion, around EUR 400 million of which will be used for the planned investment. Furthermore, 70 tonnes of cheese and 15 types of bread leave the Group's food plants every day.

The company's latest expansion, it claims, has created the "production facility of the future for fine meat products". In addition to the feed manufacturers, the group now also includes animal fattening and product refinement. It has set up partnerships to ensure the smooth running of the food production. Fair milk prices are just as important here as the production of veal and organic pigs, all of which are reared in Belgium itself.

A great deal of importance is also attached to the aspect of animal welfare. The piglets are castrated without physical intervention, any eggs which are taken come from free-range hens and the use of antibiotics has been considerably reduced. The rabbits are not held in cages. All slaughterhouses are audited annually by an independent institute. A new addition to the programme is organic pig fattening in exclusively Belgian operations.

A production chain for organic meat has been launched to meet the demand for organic pork, which currently outstrips supply in Belgium, . Delavi and the service provider Biovar.de are also involved alongside the Colruyt Group.The three specialists joined forces to set up a closed production chain for organic pork which is able to produce sufficient quantities for the domestic market.  Biovar is responsible for rearing the pigs, Delavi for coordinating transport, slaughter and cutting, while the Colruyt Group takes care of purchasing and a large part of the marketing.
Source: fleischwirtschaft.com, afz - allgemeine fleischer zeitung 40/2019 / dfv media group
tags:
Belgium Colruyt Hollywood ISS Much