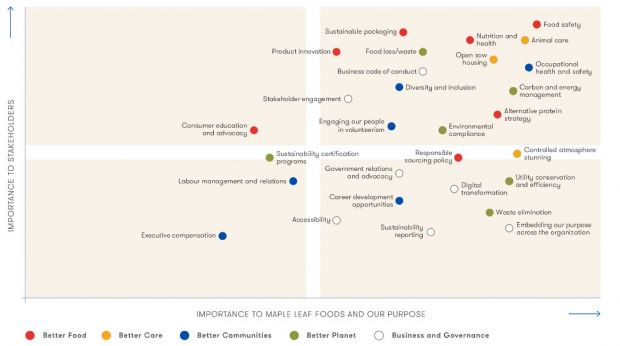 The list of topics helps guide their annual sustainability reporting.

CANADA, Mississauga. Maple Leaf Foods announced a massive step forward on its sustainability journey, as it becomes the first major food company in the world to be carbon neutral. The Company's announcement acknowledges the impact of the global food system on the environment and the urgent need for transformative change to reduce global greenhouse gas emissions to zero.


The company has made significant progress towards its goal to reduce its environmental footprint by 50% by 2025 - an aggressive environmental target in the industry. Since 2015, it has reduced over 86 mill. kilowatt hours of electricity – equal to 12,912 passenger vehicles driven for one year - and over 4.3 mill. m3 of natural gas, which equals annual energy usage for 1,000 homes. Through its water conservation efforts, Maple Leaf has reduced water usage by over 1.2 bn. liters. By committing to setting Science Based Targets, the firm will work even more aggressively to reduce greenhouse gas emissions across its operations and more broadly within its supply chain.

In align with Paris Agreement

As a leading North American producer of meat and plant proteins, Maple Leaf's path to carbon neutrality is predicated on aggressively reducing emissions by meeting the gold standard of widely respected Science Based Targets, which align global  greenhouse gas emission reductions with the goals of the Paris Agreement on Climate Change. In doing so, the company becomes one of just three animal protein companies in the world to set Science Based Targets, approved by the international Science Based Target Initiative.

As part of becoming carbon neutral, the company is also investing in credible and independently verified, high-impact environmental projects throughout Canada and the United States to address its remaining carbon footprint, bringing it to zero. These projects support wind energy, recovering methane gas from landfills, composting and biomass programs to reduce methane emissions, and forest protection and re-forestry to conserve species and biodiversity.