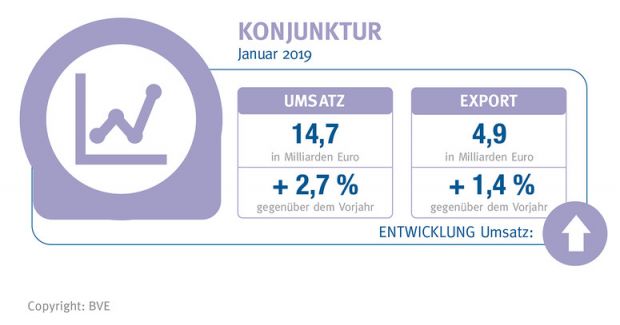 GERMANY, Berlin. The German food industry generated sales of € 14.7 bn. in January 2019. This enabled the industry to start the new year with growth of 2.7% compared to the previous year. This growth was mainly due to an increase in sales volume of 1.7%, but sales prices also rose slightly at home and abroad.


A good third of sales in January were again generated by exports as a source of income for the saturated domestic market. A total of € 4.9 bn. worth of food was exported, 1.4% more than in the previous year. At the same time as this positive start to the year in terms of sales, production was reduced slightly. The calendar and seasonally adjusted production index fell by 1.4% year-on-year. This overall positive development at the beginning of the year gives reason to hope that the stable economy will continue.

The monthly ifo Business Climate Index is an indicator of the mood and expectations of the food industry. In March 2019, the mood among food manufacturers was confident, but the business climate had to lose more points compared to the previous months of January and February. Compared to the same month last year, however, the business climate has improved and in particular the expectations for production, exports and sales prices for the coming three months were consistently positive.

GfK Consumer Climate is an important indicator of consumer sentiment. In March 2019, the index maintained a high level of 10.7 points despite a slight decline of 0.1 points. While consumer economic expectations are at a low level year-on-year, the consumer climate is supported primarily by a high propensity to buy and high income expectations.

With good income prospects, consumers are also focusing on sustainable enjoyment in everyday life. Demand for higher-quality food is particularly strong. Moderate inflation supports this trend. In February 2019, food prices rose by only 0.6% and general consumer prices by 0.4% compared with the previous month. Compared to the previous year, the price increases of 1.3% and 1.5% were also moderate.