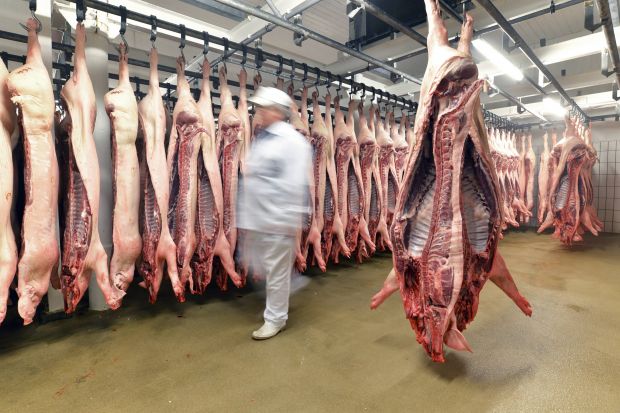 The first case of ASF in Germany unsettles the market participants. The concern is also great in other EU countries.


The first confirmed case of a wild boar infected with African swine fever (ASF) has greatly unsettled market participants in Germany and beyond, as local exporters are now threatened by the loss of almost all third country markets for pork.

This bad news was not yet known before the decisive slaughter pig quotation by the Association of Livestock and Meat Producers' Associations (VEZG) last Wednesday (September 9), which remained unchanged at € 1.47 per kilogram carcass weight. The reduction of the still existing surpluses on the live market in some parts of the country is likely to become more difficult due to the expected soon faltering third country exports and the seasonally increasing pig supply.

Although it is still possible to export pork to other countries of the European Union, whose volume accounts for more than three quarters of German foreign sales, the loss of the booming and also lucrative China business in particular would cost a lot of added value.

The experiences of Belgian exporters after the occurrence of the ASF there have also shown that the meat buyers also take advantage of such emergency situations in order to lower the purchase prices. If German exports to third countries had to be diverted to the domestic market - last year, this amounted to a good one million tons, including slaughter by-products - there would also be a threat of price pressure on the meat market with consequences for the prices of slaughter pigs.

Last Friday (September 11), for example, the price recommendation of VEZG was drastically corrected. The price plunged by 20 cents to € 1.27 per kilo of slaughter weight.

Other EU countries are therefore observing the development in Germany with concern, even if they themselves should get a larger share of the China business. The Danish slaughterhouse group Danish Crown suspended its quotation for slaughter pigs last Thursday (September 10) due to market uncertainty. The Association of Agricultural Processing Producers (VLV) in Austria also expects volume pressure if Germany does not succeed in persuading the Chinese authorities to accept regionalization in view of the import requirements there. The VLV quotation initially remained unchanged at € 1.58 per kilogram of slaughter weight.

In France, the Marché du Porc Breton (MPB) also predicted imminent distortions in the EU internal market for pork. However, last Thursday's quotation initially focused on the situation on the domestic market. Slaughter pigs were sought after by meat producers there due to the good national and international demand; the quotation rose by 1.5 cents to € 1.386 per kilo slaughter weight compared to the previous week.

There was an even stronger upward trend in Italy, where the national quotation for slaughter pigs - with the support of rising meat prices - rose by three cents to 1.401 euros per kilo live weight. Previously, Dutch slaughterhouses had already raised their purchase prices by around five cents per kilo slaughter weight in the previous week, as export barriers to China were lifted.

In Belgium, after the first ASF cases in September 2018, preparations are underway to obtain export approval in China again. Currently, however, slaughter pig prices there remained unchanged. This was again the case in Spain. Among the Iberians, the supply of live pigs is smaller than the demand, and exports to China are also booming. However, according to Mercolleida, slaughter companies are "capped" by the lower prices for slaughter pigs in Germany and other countries. The quotation in Spain remained unchanged at € 1.30 per kilo LG. According to Mercolleida, a positive aspect is that despite the rising number of corona infections in the population, no slaughterhouse is currently closed due to Covid-19.

In the week to September 6, comparatively little movement had been observed in slaughter pig prices in the EU. According to information from the Brussels Commission, animals in category E on average in the 27 member states were invoiced at € 150.80 per 100 kgs slaughter weight; this was € 0.23  or 0.1% more than in the previous week. The shortfall on the previous year's price was a good € 30 per 100 kg or 17%. In the week under review, an unusually sharp increase of 14.1% in the price of slaughter pigs was reported for Italy. This is clearly above the maximum permissible increase of five cents per kilo of live weight at the national leading quotation this week, which would have led to an increase of less than 4%. A statistical error is therefore not excluded.

Otherwise the fatteners in Lithuania and Latvia could be pleased about additions of 2% and 2.4% respectively. In Belgium, Austria, the Netherlands, Denmark, Bulgaria and France the fatteners received between 0.7% and 1.4% more money for their animals. Germany, Portugal, Hungary and Ireland reported unchanged prices. On the other hand, according to the Commission, the prices paid out by slaughterhouses in Spain, Poland, the Czech Republic and Estonia were slightly below the previous week's level, dropping by between 0.5% and 0.8%. There were deductions of 1.4% each for the Finnish and Romanian fatteners.