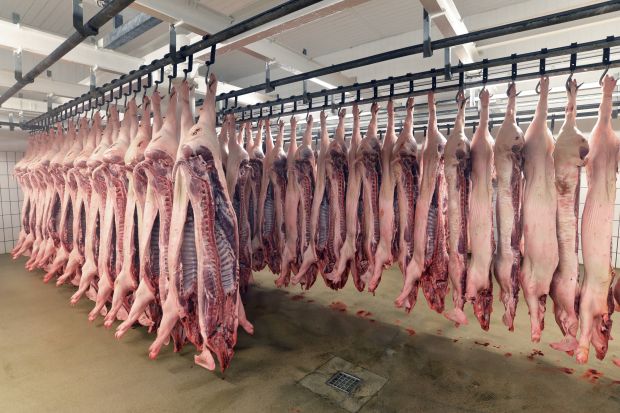 Photo: Imago Images / Westend61
Slightly higher carcase weights meant pig meat production across the year to date was down by 2.5% on a year earlier at 9.47 million t.
Related Topics:

fleischwirtschaft.com — UNITED KINGDOM, London. According to the latest figures from Eurostat, EU pig slaughter in May was nearly 8% down on the same month last year. Throughput totalled 18.8 mill. head, 1.6 mill. fewer than a year earlier, with Covid-19 related disruption taking its toll.
Facebook
Twitter

This meant that the number of pigs killed across the EU in the first five months of the year was down by 3% at 100.1 million head. Slightly higher carcase weights meant pig meat production across the year to date was down by 2.5% on a year earlier at 9.47 million t. Production in May alone was nearly 7% lower year-on-year.

Despite the overall downward movement in May, there were contrasting trends in different member states. Some countries that had faced disruption in April continued in the same vein; German throughput was 7% lower than last May and Italian slaughter was down by 17%.

Meanwhile, the Netherlands recorded a large fall for the first time (-28%), as did France (-14%). The scale of the decline reported in the Netherlands is larger than elsewhere, and while it is certain that pig throughput was affected by coronavirus outbreaks in abattoirs during the month, the decline is perhaps a little overstated.

In contrast, throughput was somewhat higher on the year in Denmark, Spain, and some of the smaller pig producers. Danish kill in May was up by nearly 2%. With falls earlier in the year though, Danish slaughter for the year to date was stable overall.

Livestock More pigs because of Corona