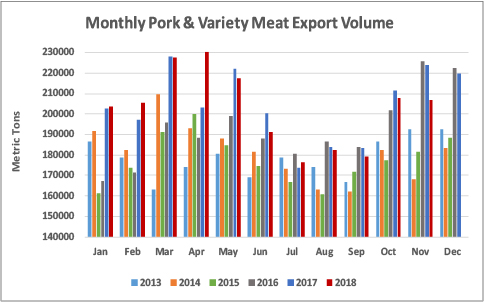 After a very solid start to 2018, November pork exports to leading volume market Mexico were lower year-over-year for the sixth consecutive month.

USA, Washington. US beef exports continued on a record pace in November while pork exports trended lower year-over-year, according to statistics released by USDA and compiled by USMEF. November export data was released about one month later than usual due to the recent government shutdown.

Beef export value per head of fed slaughter is also on a record pace, averaging $322.97 in November (up 5% from a year ago) and $320.72 during the first 11 months of 2018 (up 14%). Exports accounted for 13.1% of total November beef production and 10.9% for muscle cuts, both steady with November 2017. For January through November, exports equated to 13.4% of total production and 11.1% for muscle cuts – up from 12.8% and 10.3%, respectively, in 2017. These numbers highlight the strong international demand for US beef as exports are accounting for a larger share of growing US production and are fetching higher prices, with some US cuts trading at record prices in Asia.

The combination of retaliatory tariffs in China and Mexico contributed to sharp decreases in ham and picnic primal values (down 19% and 22%, respectively, from June through December, compared to the same period in 2017). The decrease in values for these two primals averaged $9.95 per head for those seven months. China’s retaliatory tariffs have also heavily impacted prices for pork offals and have forced some products into rendering due to the lack of alternative markets. Lost value for feet and picnic hocks was at least $1.80 per head and losses are even worse when products that have been rendered are included. The cost of these retaliatory tariffs has been lost value of at least $11.75 per head on just hams, picnics and feet, or roughly $860 mill. in industry losses from June through December 2018.