Results weakened by problems in the UK 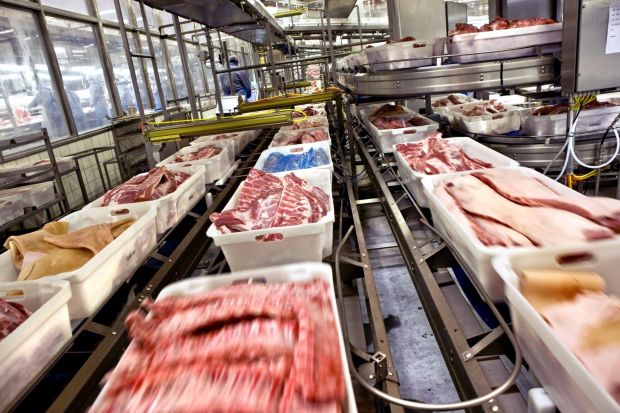 DENMARK, Randers. Danish Crown is doing all it can to bolster earnings for the benefit of the group’s owners – the Danish farmers.

However, ongoing problems in the group’s UK business are impacting Danish Crown’s earnings to such an extent that it will now take an extra two years to realise its strategic target of raising the settlement price paid to cooperative members by 0.60 DKK per kg.

“We’re definitely not happy with the financial statements. We’re still badly affected by the problems in our UK business. At the same time, a combination of turbulance on the world market, generally low world market prices for pork and a strong euro has significantly undermined our profit in the past year. Contrary to expectations, we have therefore not managed to improve our overall performance but have instead gone into reverse. This is not good enough, and more than anything it is frustrating, because in most other respects our strategy is succeeding.” says Jais Valeur, Group CEO of Danish Crown.

Due to declining pork and beef prices, Danish Crown’s revenue in the 2017/18 financial year has, in spite of acquisitions in the period, declined from DKK62 bn. to DKK61 bn. On the other hand, the gross profit is up DKK146 mill. at DKK8 bn. following the acquisition of DK-Foods in Denmark, Gzella in Poland and the Dutch company Baconspecialist Zandbergen. The new activities have also led to increased distribution and administration costs. The profit from primary operations is reduced by DKK181 mill. to DKK1,742 mill.

The group has posted a total profit for the year of DKK1,361 mill. This represents a decrease of DKK151 mill. compared to the profit for 2016/17, when adjusted for special items such as non-recurring income from the divestment of Plumrose. The Board of Directors recommends that supplementary payments of almost DKK1.1 bn. be disbursed. This corresponds to DKK0.83 per kg pork, while sow and cattle suppliers will be paid DKK0.73 and DKK1.0 per kg, respectively, when including the return on the cooperative members’ accounts of DKK42 mill.

“After this summer’s drought, in the last three months of the financial year we have deliberately chosen to pay higher pig and cattle prices than warranted by the market. We have done so to meet the ongoing liquidity needs of our owners. This costs on the bottom line, and therefore we are ending the year with supplementary payments that are below what we have paid in recent years, but which are as high as is possible with a low but satisfactory level of consolidation.” says Erik Bredholt, Chairman of the Board of Danish Crown.

It is primarily Tulip Ltd that is dragging down the results. Despite the fact that the company actually returned a profit on ordinary operations for the first quarter of the fiscal year. A net operating loss of DKK260 mill. has been posted for the year against a loss of DKK231 mill. last year.

“A detailed review and analysis of Tulip Ltd has revealed that we have been unable to fully optimise our UK supply chain, while operating costs are far too high. We have therefore launched a comprehensive cost-cutting plan, and in the past two months we had to say goodbye to more than 150 salaried employees in the UK business. Altogether, we expect to reduce costs by more than DKK200 mill. from the 2018/19 financial year.” says Jais Valeur. He added: “The other processing companies have posted better results than last year. Our Polish company Sokołów’s earnings are up 26% and Tulip Food Company in Denmark posted growth of 29% following a year of improved sales of bacon in Europe and growth in exports of canned meat. During the year, both companies have implemented significant acquisitions, which will contribute to boosting earnings in the two businesses in the future.

DAT-Schaub is again posting strong earnings, once again confirming the company’s potential. “DAT-Schaub is developing strongly. The offensive strategy that we adopted after acquiring all the shares in the company almost three years ago is spot on. Today, we are a global market leader in natural casings, and our set-up is geared for further growth.” says Jais Valeur. He added: “In Denmark, it has been possible to strengthen the supply of slaughter animals for our abattoirs. During the year, 4% more pigs and 2% more cattle were slaughtered. This has created more jobs at the abattoirs, and at the end of the financial year Danish Crown had 236 more employees in Denmark than a year ago, representing an increase of 2.8%. At the same time, we have won significant market shares on the Danish market for both beef and pork.”

“Our growth in Denmark is explained by our unswerving focus on quality and the Danish origin of the animals. Overall, our employees across the group have worked fantastically hard during the year, and so despite the disappointing financial results, I’ve been confirmed in my view that the course set by the 4WD strategy is right. We must continue to strengthen our four domestic markets in northern Europe and our Asian business, because it’s all about establishing the right positions in the market.” says Jais Valeur in conclusion.