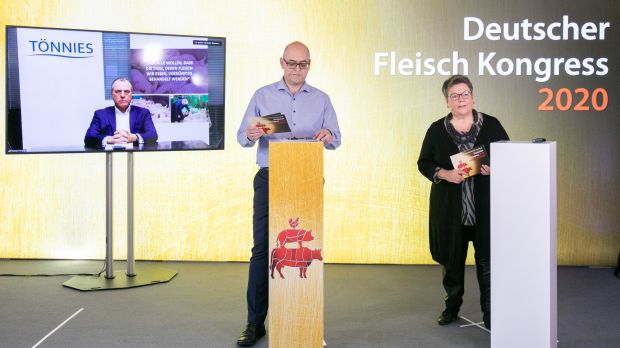 Clemens Tönnies - here in conversation with Renate Kühlcke and Dirk Lenders - hopes that the pork congestion will soon disappear, but fears further falling producer prices in the short term.

GERMANY, Frankfurt. Despite what are currently probably the most turbulent months in the company's history, Clemens Tönnies radiated confidence at the German event Deutscher Fleisch Kongress.


Hardly any other German company made the headlines in the Corona crisis as much as the meat company Tönnies. Although he had received "full media coverage", Clemens Tönnies was able to joke again at the event of the dfv Mediengruppep in Frankfurt. In the meantime he felt "like the inventor of Covid-19", he joked in conversation with Renate Kühlcke (FLEISCHWIRTSCHAFT) and Dirk Lenders (Lebensmittel Zeitung). 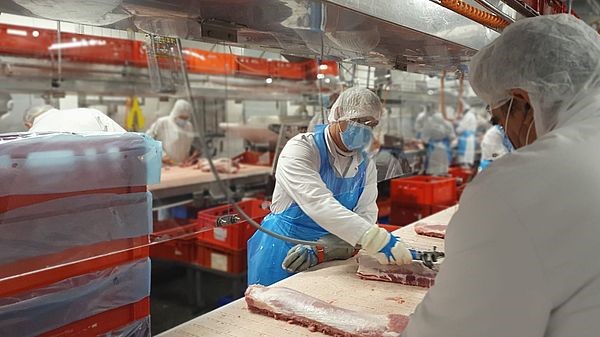 Tönnies
Meat factory
Rheda Tönnies may slaughter more again
Germany's largest slaughterhouse can once again accommodate as many pigs as before the corona-related shutdown in July. The ISN is relieved. more ››

The head of the group, who was called in from the company headquarters in Rheda-Wiedenbrück, had reassuring news for pig farmers. Slaughtering at the main plant could be brought back up to normal levels, which means that 40,000 more animals will be taken in from the coming week compared to the previous ones. During the slow ramp-up, there would still be a little "rumbling", but Tönnies was optimistic that the situation in the stables would relax, because the slaughter figures also rose again in the slaughterhouse of the group subsidiary Weidemark in Sögel.

As far as the pig price was concerned, however, Tönnies did not have good news for the producers. The current quotation of the Association of Livestock and Meat Producers' Associations (VEZG) of 1.27 € per kg carcass weight "we will not be able to maintain it because the market in Europe is under pressure". The meat warehouses are full because there is a lack of sales to third countries due to African swine fever (ASF). He hopes for an opening in the next weeks, because China has a high import demand. For the coming year Tönnies encouraged the producers: "The piglet prices will go up and we will see completely different pig prices. 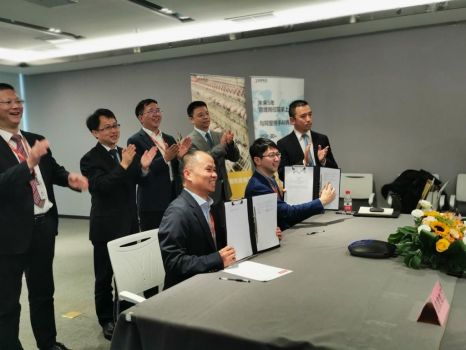 Tönnies
Contract
First non-European plant for Tönnies
Together with the Chinese Dekon Group, the Tönnies Group is building its first location outside Europe. more ››

At the moment Corona is putting an enormous strain on the meat industry, but compared to other industries they are still relatively well off. The company was and is being shaken by the high costs of the Corona tests, personnel expenses and above all the temporary standstill of production ordered by the authorities. When asked, he named a loss of 2.5 million Euros on each of the 30 days of forced closure. He is still annoyed by the fact that large quantities of fresh meat spoiled after the production rooms were sealed. The 322 truckloads had to be disposed of in a rendering plant. "I am still thinking about who I can send the bill for this," Tönnies now showed himself to be serious again.