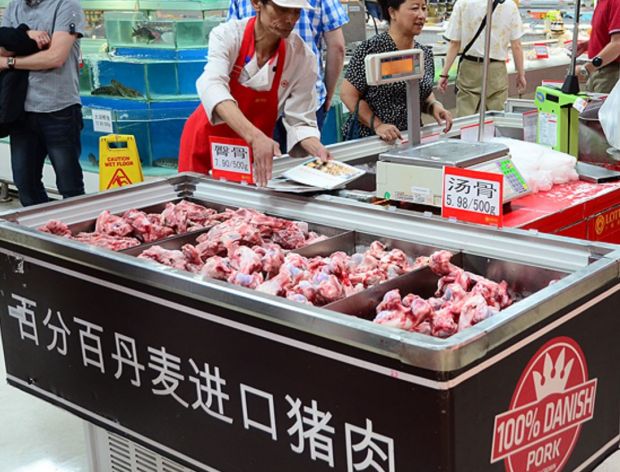 DENMARK, Randers. Danish Crown and Alibaba’s Win-Chain have today signed an agreement on weekly deliveries of 250 t of Danish pork from Danish Crown’s new factory in China for five years. The agreement is worth at least €300 mill.

Even before the first pork chop based on Danish raw material has been cut and packaged at Danish Crown’s new processing facility in China, the ‘sold-out’ sign is going up. All the capacity at the new plant will be used to supply Win-Chain, Alibaba’s data-driven aggregated global sourcing platform for perishable food.

“It is fantastic for Danish Crown to land such a big contract with Win-Chain and the Alibaba Group. At one fell swoop, our products will be made available on Win-Chain’s digital platforms and also in the Alibaba-owned supermarket chains throughout the Shanghai region.” says Jais Valeur, DC Group CEO.

Danish Crown has been cooperating closely with the Alibaba Group since the two companies signed an agreement in August 2017 on the sales and marketing of Danish Crown products on Alibaba’s Tmall, the largest B2C platform for international and Chinese brands and retailers. From summer 2019, this cooperation will be extended to embrace a far wider range of products which will all be processed and packed at the Danish Crown factory in Pinghu outside Shanghai.

“Danish produce enjoys an excellent reputation and Danish Crown products already have a large and loyal customer base in China. Danish Crown’s integrated farm-to-fork production ensures produce of a uniformly high quality, and Chinese consumers are also attracted by the strong focus on innovation and sustainability. We look forward to working closely together to bring quality Danish meat products to the over 600 million annual active consumers on Alibaba’s platforms.” commented Richard Wang, Managing Director Fresh Meat in Win-Chain.

Danish Crown has successfully exported pork to China for a number of years, but until now, customers have mostly been Chinese distributors and processing companies. However, consumption patterns in China are changing rapidly, and getting closer to the Chinese consumer is one of the cornerstones of Danish Crown’s strategy.

In the spring, Danish Crown broke the ground for the group’s first processing facility in China. The 17,000-square-metre new facility will be sited less than 100 km from Shanghai. It has been designed to produce 14,000 t of processed products a year, first and foremost for the more than 25 mill. people living in Shanghai, but also for the rest of the Chinese population, which currently stands at almost 1.4 bn. people