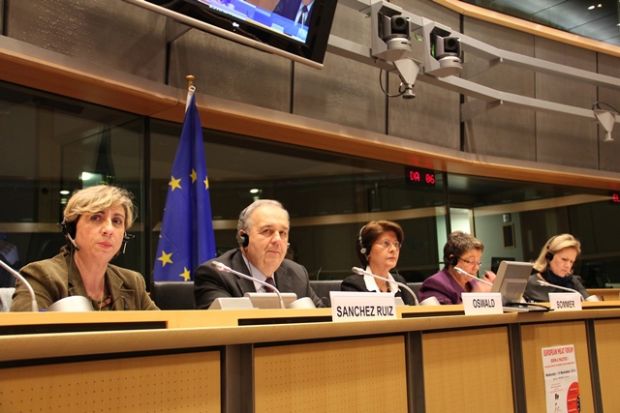 A looming shortage of skilled employees on the one hand, and alarming youth unemployment rates in some EU countries on the other - the International Butchers' Confederation is proposing certified apprenticeships as the solution to both problems.

The EU Commission is currently assessing the entry restrictions which exist for some occupations. It has now turned its attention to the master craftsman's diploma, creating strong resentment among the butchery sector in Europe.

In the countries where the title is part of the occupation's traditional image, the master craftsmen want to secure its continuation as a quality seal and as an incentive for young people to enter training.

The situation is different, however, in other European countries. In some states, Spain for example, there is no regulated training. The member organisation there, Cedecarne, is currently trying to set up a dual training system based on the German model and the principle that qualification-based training offers young people opportunities and prospects.

The agenda of this year's European Meat Forum of the International Butchers' Confederation (IBC) in Brussels, moderated by afz Editor-in-Chief Renate Kühlcke, also reflected these concerns. Following Dr. Horst Schnellhardt's departure from the EU Parliament, the organisation has secured Dr. Renate Sommer as its new patron. The MEP immediately demonstrated her determination and resolve to fight the corner of the butchery industry on taking to the platform.

The conservative representative spoke out clearly against lowering levels in Europe, with the negative results that then ensue. "Getting rid of functioning systems is not the right solution," she said. "Youth unemployment in Germany is 7.5 percent in comparison to the EU average of 25 percent, not least because of the proven dual training system," she continued. Sommer: "We in Europe should learn from each other."

Hosted by: Renate Kühlcke, afz Editor-in-Chief, Frankfurt am Main
Barbara van Liedekerke represented the Commission's standpoint in the discussion. The legal expert emphasised immediately that the intention was not to do away with the master craftsman's diploma. Nor is the dual training system up for consideration. Her authority had merely urged a review of existing entry restrictions to ensure that they still reflect the current market situation, she pointed out.

The top priority now is to create transparency between the different systems, explained the Austrian. The member states are currently entering their regulations into a database. This will then be used as the basis for learning from each other. "We're not looking to drag everyone down to the lowest level," said van Liedekerke. "That isn't the purpose of what we're doing." However in some countries - Germany and Austria, for example - it is no longer possible to find enough young people to take the apprenticeships.

The increased transparency could also result in greater mobility, leading in turn to economic growth. And that is the declared aim of the new EU Commission of Jean-Claude Juncker, she added.

IBC President Jean-Marie Oswald drew guests' attention to the negative effects of deregulation in the panel discussion and the plenary session, taking Germany as his example. Following the abolition of mandatory master craftsman diplomas in 53 occupations in 2003 there was an immediate sharp rise in the numbers of start-ups, but very few of these were master craftsman-based enterprises offering apprenticeships. "This was a slap in the face for quality craftsmanship and opened the door for unemployment," scolded Oswald.

María Sánchez Ruiz of the Cedecarne association described the current situation facing Spanish butchers. There is no classic production-based apprenticeship there. A butcher's training covers just 500 hours and is oriented towards the retail sector.

The association is therefore currently devising a new apprenticeship model which includes three years of basic training covering the fundamentals required for setting up in business. Specialisations such as cutting or sausage-making will then be added in the third year. Sánchez has also made it clear to her ministry that the future of non-industrial butchery depends on such solid training.

Sommer also highlighted two further problem areas. First she mentioned the new food controls regulation which is about to receive its second reading. "This will create problems in all member states if we don't have proper training." Secondly she pointed out how young people are now placing an increased emphasis on leisure. Young people starting out in their careers simply don't want to work so much, she said.

"I'm really not so sure that obtaining a master craftsman diploma still holds any appeal." In this point she was in agreement with Barbara van Liedekerke who clearly supported the view that skilled trades need to be made more attractive again. The industry has come to the same conclusion itself, she said, "but a push in the right direction won't do any harm."