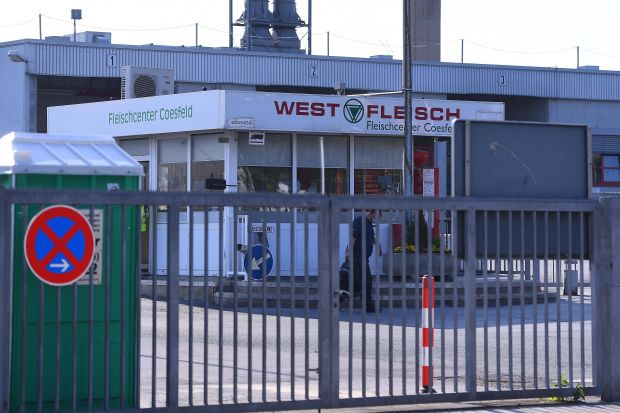 Photo: imago images / Revierfoto
The Westfleisch site in Coesfeld will be closed temporarily. So far 191 employees have tested positive in the slaughterhouse.
Related Topics:

fleischwirtschaft.com — GERMANY, Frankfurt. At the weekend, the number of new coronavirus infections rose again alarmingly in several districts. In Schleswig-Holstein and North Rhine-Westphalia, this was mainly due to high infection rates among slaughterhouse staff.
Facebook
Twitter

This puts the relaxation of the corona measures at risk. The district of Coesfeld has postponed the gradual withdrawal of restrictions, for example in the catering trade or in private gatherings of people, originally planned for today's Monday, until 18 May for the time being.

The district of Recklinghausen is also on heightened alert. At the Westfleisch site in Oer-Erkenschwick, a series of tests among the employees also began at the weekend. A pandemic special commission was set up in the company and various measures were implemented in consultation with the health authorities. These include the wearing of mouth and nose protection on the entire site, the division of workers into small groups, no crossing in the break rooms or extended protective clothing. In addition, fever is measured contactlessly at the factory gate for each person.

After the infection figures in Coesfeld and Oer-Erkenschwick skyrocketed, the North Rhine-Westphalian state government instructed the health authorities in the state to test all the employees of the large NRW slaughterhouses for corona, including the contract workers. Health and Labour Minister Karl-Josef Laumann put the figure at 17,000 to 20,000 people. In addition, the CDU politician announced that the health authorities will inspect all collective accommodations for employees of the meat industry. The goal, he said, was to examine the extent to which the infection control regulations could be observed at all. Laumann announced a determined approach in this regard.

In Schleswig-Holstein, too, all employees at the large slaughterhouses are now being tested for Sars-CoV-2 and the accommodations are being checked. The staff of the Vion plant in Bad Bramstedt had already been tested last week, with negative results.