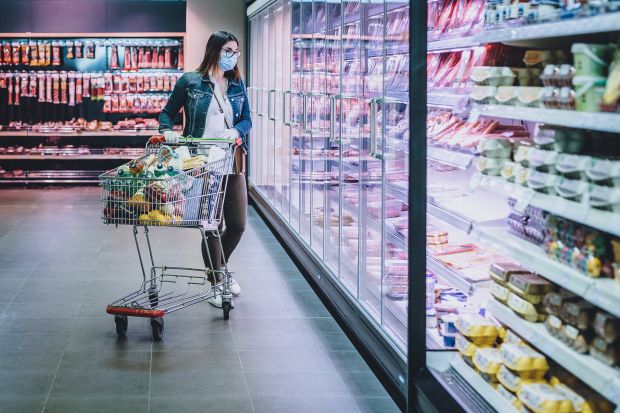 The hoarding during Corona times is still going on.

GERMANY, Frankfurt. As social distancing measures sharpened further and the number of confirmed Covid-19 cases continued to rise, the final week of March showed Americans’ ongoing stocking up in food and beverages while non-food stockpiling showed signs of easing.

While packaged and frozen food are accounting for a greater share of grocery spending post Covid-19, the demand for meat and poultry remains highly elevated. According to IRI, meat has been the leading sales driver for the perimeter since the onset of coronavirus in the US. 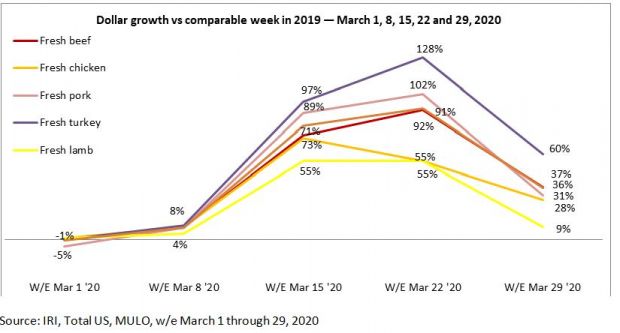 During the week of March 29, total perimeter sales were up 12% versus 36% for total meat and poultry (fresh and processed), despite many stores running shorter opening hours. This is on top of the 80% surge the week ending March 15 and 92% the week of March 22. Volume sales have been trailing dollar sales throughout March and were up 28%. In many cases, retailers continued to limit the number of items per household, particularly on popular powerhouses, like ground beef and chicken breast. 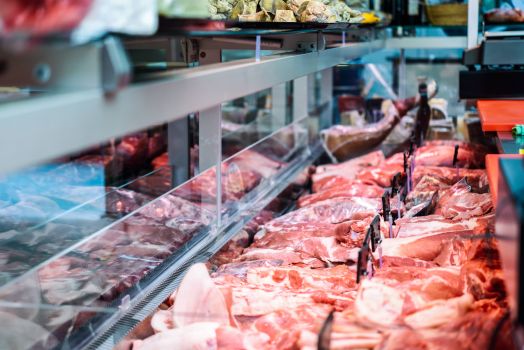 All meat and poultry continued to sell far above typical levels, with turkey continuing to have the highest percentage gains. Year-to-date, dollar gains for total meat are up 17% over the comparable period in 2019, according to IRI.

Smaller proteins and claims-based meat likely continued to benefit from stockouts in conventional beef and chicken. Beef and chicken, the two largest proteins, saw the largest increases in terms of dollars, and turkey was once again the highest in percentage growth during the week of March 29. In absolute dollars, beef sold an additional $158 mill. versus the comparable week last year, with more than 55% of it generated by ground beef. Chicken generated $61 mill. more during this last week of March than in 2019. Ground continued to be big, regardless of species, given its versatile and easy-to-prepare nature.

With the exception of turkey, volume sales growth trailed dollars. Pork, in particular, saw a significant gap the week ending March 29, with dollars up 31% but volume up 16%. 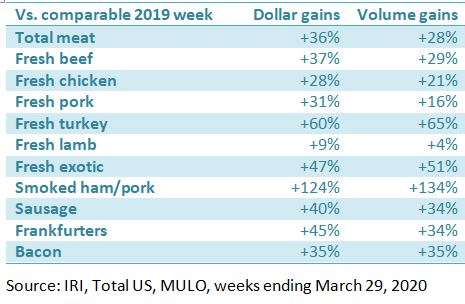 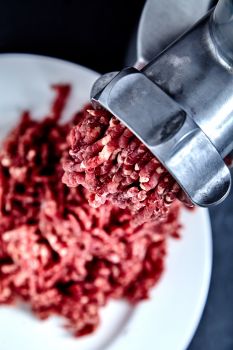