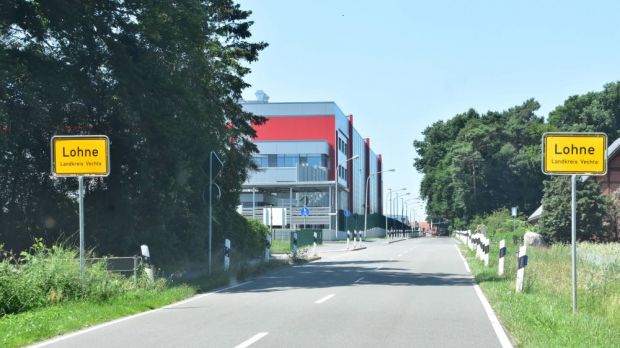 Photo: imago images / Sven Eckelkamp
In the PHW Group's slaughterhouse, hygiene measures are once again being tightened up.
Related Topics:

fleischwirtschaft.com — GERMANY, Lohne. The slaughterhouse in Lohne does not have to be closed. The infections are not directly related to the production.
Facebook
Twitter

After corona infections were detected in 66 employees of Oldenburger Geflügelspezialitäten (OGS) in Lohne, the company and the district of Vechta are confident that they have the situation under control. In the middle of the week, all OGS employees will be tested for the virus again by the health department of the Vechta district, they announced.

The operation in the slaughterhouse, which belongs to the PHW group, does not have to be interrupted, as no major source of infection could be detected within the plant. "It can therefore be assumed that the infections are due to the private interactions," the district authorities announced over the weekend. The infected employees live in the district of Vechta and the neighboring districts. The positive findings come from a current investigation in which 1,056 employees were tested. Previous row tests had shown two positive cases. At the end of June, the company group was confronted with a major outbreak at Geestland Putenspezialitäten.

The company is responding to the current development by further tightening up its hygiene management. The risk-based tests would be intensified once again, the PHW Group announced on Sunday. Once again, complete disinfection of the entire area of the company will be carried out. At the plant, there had only been an increase in the number of cases in the normally temperature-controlled cardboard box area with seven infected persons. The hygiene controls there are now to be intensified. The PHW Group emphasises that those who tested positive in the row test do not work in the slaughter and cutting area, as this is fully automated.

The company is using the new infections as an opportunity to provide further intensive training for its employees. Additional break rooms are being created in order to better comply with the distance rules. The different work shifts will be completely separated in order to keep potential infection as low as possible. Before starting work, all employees returning from a risk area are subject to a 14-day precautionary quarantine obligation. All returnees from holiday or quarantine and all new recruits must be tested for the corona virus before starting work. More vehicles are to be used in collective transport to drive the contract workers to work in smaller groups.

The Lohne plant belongs to the PHW Group, which is Germany's largest producer of poultry meat under the Wiesenhof brand. Large parts of the plant were rebuilt after a fire in 2016. Since December 2017, fattening chickens have again been slaughtered in Lohne. The plant is regarded as one of the most modern of its kind in the world and is approved for the daily slaughter of 432,000 animals. The incidence rate, which indicates the number of new infections per 100,000 inhabitants within seven days, is currently 41.67 for the district of Vechta and thus below the lockdown threshold of 50 persons. The district is therefore not currently taking any lockdown or similar measures.