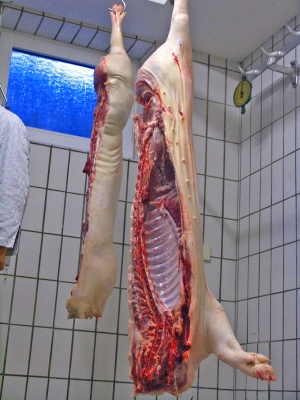 Asia-Pacific continued to account for the bulk of this figure, with almost 60.9t of the total.

In terms of growth, all regions displayed positive developments apart from Western Europe, where consumption of pork declined by 0.3%. Eastern Europe and Asia-Pacific were the most dynamic regions, with volume sales increasing by 5% and 3%, respectively, in 2013.

In both regions, pork continues to be an important and affordable source of animal protein. In Asia-Pacific, it leads overall meat volumes with a 54% share of sales while in Eastern Europe it closely follows poultry with 40% of total meat sales.

China is the driver in Asia-Pacific

Pork consumption in Asia-Pacific has been driven by demand in its largest market, China, with the country accounting for 82% of regional volume sales. Rising consumption in China can be attributed to increasing prosperity and the growing number of consumers who can afford to cook and eat pork more often.

Of all types of meat, pork enjoys the biggest consumer base in China, accounting for 63% of total meat volume sales in 2013. With per capita pork consumption of 36.9kg, China registered almost treble the global average (12.5kg) in 2013, and nearly double the per capita intake (19.3kg) in the US.

Fuelled by a steadily growing middle-class in China and rising incomes, pork volumes rose by 16% over the 2008-2013 Review period compared to 12% globally. Despite a series of food safety issues surrounding Chinese pork in recent years, including clenbuterol contamination in March 2011, the outbreak of swine flu and the dumping of thousands of dead pigs into the river that feeds Shanghai's water supply in April 2013, consumption continued to rise.

Sales are being supported by strong demand from the rural population, supplied by numerous wet markets. In urban areas, consumers' quest for safer products has translated into the growing popularity of branded pork. However, branded meat distributed through supermarkets and specialist stores in the major cities of Guangzhou, Shanghai and Beijing remains a small niche in China.

NA sales driven by pork growth in the US

In 2013, North America saw volume sales of fresh pork increase by 1.4%. For the second consecutive year, positive growthwas driven by the US market, with the National Pork Board's ‘Pork: Be Inspired' campaign continuing to gain momentum following its launch in 2011.

The campaign has been focusing on the retail promotion of pork, encouraging consumers to cook pork dishes using recipes and tips from award-winning chefs. The 2013 grilling season saw a boost in sales as consumers served ribs and chops while increasingly entertaining and hosting gatherings in their homes.

Pork is the third most popular meat behind poultry and beef/veal in the US market, accounting for one quarter of overall meat sales. It's positioning as "the other white meat" appeals to
health-conscious consumers looking to replace cholesterol-rich red meats with leaner alternatives and helped boost sales over the 2011-2013 period. Consumption of pork through retail, foodservice and institutions averaged 19.3kg per person in 2013.

Overall out-of-home sales accounted for 41% of total meat volumes in 2013. The popularity of pork dishes ordered by Americans at full-service restaurants, cafés, fast food and other foodservice formats further boosted pork sales. According to Technomic Inc's 2013 Volumetric Assessment of Pork in Foodservice, pork has been the fastest-growing type of protein over the past two years in the US.

Overall fresh pork consumption in Western Europe continued to fall in 2013, albeit marginally. The fall has been partly driven by the recessionary climate and the rising cost of meat production, resulting in higher retail prices. Furthermore, an increasing number of studies linking meat consumption with a higher risk of mortality from cardiovascular disease and cancer has led to the trend towards meat reduction and the rise of flexitarian diets, centred around plant-based foods, although including the occasional helping of meat.

Germany, the largest market in Western Europe and accounting for 26% of regional pork sales, recorded a 2% decline in volume terms in 2013. In Germany, around seven million people are vegetarians, equating to 8-9% of the population (Institut für Demoskopie Allensbach, 2011).
Surveys show that 51% of the German meat-eating population have been reducing their meat consumption, claiming the negative effects of intensive livestock breeding and antibiotics on the quality of meat as the main reasons behind their decision.

In Spain, the shift towards cheaper meats such as pork and poultry continued in 2013, with these categories clearly outperforming beef and veal and lamb, mutton and goat, and boosting overall growth. Pork witnessed a marginal 0.6% gain in total volume sales in 2013, benefiting from a recovery of cold cuts and ham in consumer foodservice, while also posting gains within retail, due to being an affordable and traditional food option in Spain.

French consumers also veered towards pork as retail price increases were less pronounced than in other meats such as beef and veal. Pork, therefore, enjoyed something of a revival in consumer demand, leading to 0.5% volume growth in 2013.

Latin American diets rely heavily on poultry and beef/veal, while pork remains in third position, accounting for 15% of total regional meat sales. However, the category outperformed the wider meat market in 2013, with 5% volume growth driven by a buoyant pork market in Mexico.

The unsaturated Mexican market was identified as a strategic export opportunity for American pork by the US Meat Export Federation (USMEF) in 2011. The latter designed a promotional campaign, aimed at changing the perception of pork among the target consumer group of 25-
to 45-year-olds, and open the way for pork from the US. The US industry-funded campaign has been promoting pork consumption via the mass media and in-store point-of-sale advertising, including recipes of pork-based dishes.

Despite growing pork sales for the second year running, pork remained the third most consumed meat in Mexico after poultry and beef/veal.

The way forward for pork

According to Euromonitor International's latest estimates, global pork sales are expected to grow by 13% over the 2013-2018 forecast period. Most of this rise will be seen in the emerging
markets of Eastern Europe, Asia-Pacific and Latin America, where growing populations will support volume growth.

A lacklustre performance in Western Europe can be offset by tailoring products to certain consumer groups, such as singletons, working consumers and families, and by creating assurance schemes auditing the entire pork production process and making it transparent for the consumer, from feed to the way the meat is processed, packaged and labelled.
Source: Euromonitor International